- October 18, 2018
Directed and produced by VP Viji, Ezhumin is a film that aims to inspire both parents and kids. 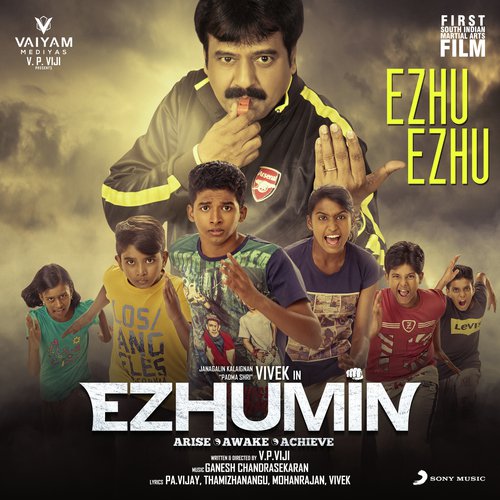 The story revolves around the happy lives of Vishwanthan (Vivek )and his wife Bharathi ( Devayani) who have a young son, Arjun who is a topper  in class and a medal- winning boxer. Viswanathan has a liking for sports and encourages 5 other kids, (friends of Arjun, at the Sundaram Sports Academy, )to do well in martial arts which they are good at.

But though the kids excel in various martial arts and sports like Gymnastics, Silambam, karate and boxing, the man who runs the academy Sundaram  ( Azhagan Perumal) is only after making profits. So he expels these kids who cant pay the fees and is happy to take bribes and  even make his students lose in matches, if the opposite party pays well.

In such a scenario, Vishwanathan tries to reason with him but to no avail. As luck would have it, Arjun dies after a boxing match due to a cardiac arrest. In his memory, Vishwanthan decides to set up a sports  academy and encourage young talent especially from  underpriveleged  homes. But due to jealousy,  his 5 top students are kidnapped by Sundaram's henchmen, on the way to a competition.

What happens after this forms the story.

The film has good production  values. The sports events and training are well conceptualized and make for genuine -looking visuals. The six child actors ( Praveen, Srijith, Vinith,Sugesh, Krithika,Deepika) who are good at martial arts in real life have been well chosen by the director and play their parts with confidence. They hold the film  together and thier sincere performance is heart warming while thier action scenes are awe inspiring, especially in the climax.
Vivek can be seen in a more serious avatar and he is the one who carries the message of the film to the audience. Training of kids to excel at self defence  is the need of the hour and the film drives home the message in an entertaining manner.
The director also emphasises the importance of encouraging and tapping upon  sporting talent in our country especially amongst the under -privileged  who can ill afford sporting activities despite potential in thier kids.

On the flip side the screenplay does lag in certain places. In some places like the songs for instance, the vibe seems to be of a 90's film

But overall Ezhumin has its heart in the right place and is an inspiring watch for families and kids.
....