Director Susienthiran is known for his in -depth handling of social issues via realistic portrayals which add a touch of authenticity to his stories.

In his  latest  film Genius, he tackles the problem of stress that individuals from cities face, as  a by-product of modern  life, with mounting study and work -related pressures, in the urge to get ahead.

The hero is Dinesh ( debutant Roshan, also the producer) who starts suffering from mental ill -health due to overwork in his IT  office . The parents ( Naren and Meera Krishnan) take him to a hospital where he's diagnosed with schiziophrenia. 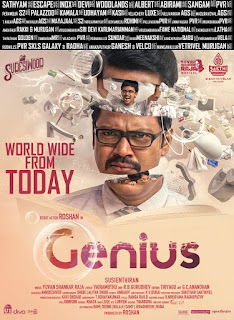 The doctor ( Jayaprakash) traces it to stress right from childhood ( no play nor hobbies, only studies and tuitions) to adulthood and says that relaxing his mind is a possible remedy failing which he may have to be hospitalised.

When everything else including meditation fails, his dad's family friend ( Singampuli ) takes him to a dubious spa to meet a call girl ( Priya Lal) who he hopes can perhaps help him relax and de-stress. The results are encouraging but the family faces a crisis when Dinesh announces he wants  to marry the girl.
What happens next forms the story.

In its favour it can be said that the director showcases well, obsessive parents who want thier kids to study at the cost of losing thier childhood and relationships  with elders and extended family.
The dangers of straining and pushing the mind and body beyond limits is well brought out.
The production is classy with trendy homes  and the realistically portrayed village life scenes effectively underline what  city -dwellers are missing out on when cut away from thier roots.

But the viewer is left wondering whether   the simplistic solution offered in the film, is the right one. One would expect a more universally applicable solution to a film which starts off with a good premise like Genius.  Touted to be a family film with a message for parents and kids, the adult scenes stand out and take away from the seriousness of the issue at hand.


The climax scene however, is an effective attempt to encapsulate the message of the film.
Genius