Producer C V Kumar who has been associated with  good cinema in the last few years, is proud of his next release, Thorati. 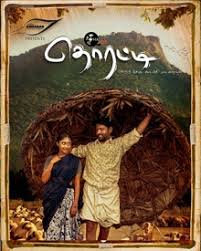 Directed by P Marimuthu and produced by Shaman pictures,  the film is based on the simple lives of shepherds and how they are impacted when thier lives are disrupted. Thorati refers to the hooked instrument used to pluck foliage for thier herds.
At a press meet on the film, said CV Kumar said who will be releasing it under his Thirukumaran Entertainment banner, "I have always been on the look out to back good cinema. After Attakathi I was searching for a good realistic film for a long  time. Even friends in my native place would ask me why I am not backing good rural stories.  But they are not always easy to find. When I saw Thorati I was very impressed. I felt it would be a proud moment for my banner to be associated with  a film with such  realistic content."
The film has been well-recieved at several international film festivals and will now soon be released in our theatres.
CV Kumar Thorati