This  remake of the  hit Hindi film Tumhari Sulu stars Jyothika in the role of Vidya Balan. The story is of a talented home maker Viji ( Jyothika) who is loving wife  and mom, and how she finds her place under the sun, discovering her inner potential and finding fulfilment in life. 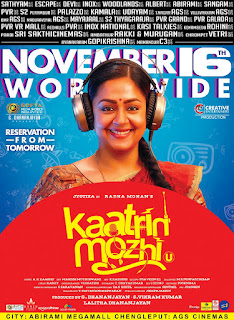 Thanks to winning a Radio show contest, Viji lands up at the radio station to claim her prize. There, however, is where she inadvertently discovers her real potential of being that listening ear and a voice which can help people, becoming an RJ of a late night show.
But how this decision to accept the job affects her husband Balu ( Vidaarth) and son Sidhu, forms the story. Is she able to rise above her limitations, social pressures and family problems and be the person she wants to be?

Easily amongst the best of Jyothika's performances, the actor slides effortlessly into the skin of the effervescent and dynamic Viji. We are moved when she cries and smile at her joys. Looking beautiful in every frame, Jyothika straddles both worlds of RJ and homemaker with equal ease, leaving her own stamp on the role. Vidaarth plays his part to perfection as a doting, supportive husband troubled by his own demons at work. Poised, graceful, dynamic Lakshmi Manchu as station head nails her role, displaying just the  right measure of restraint even in the emotional parts.  Mayilsamy as the store keeper brings out the laughs even in his limited presence while  MS Bhasker's role adds a very real and different dimension, raising  the emotional quotient of the film.

Radha Mohan seems to have left his mark on the film, keeping the original in place and yet adding the right touch of local flavours to keep the characters relatable and also very memorable. The dialogues are crisp with just the right mix of humour and sentiment and Jyothika's  scenes as RJ interacting with listeners are particularly  moving. The camaraderie between the lead couple is well brought out as is thier relationship with their son.

STR in a cameo makes for a good watch. On the flip side, Yogi Babu's presence doesnt add much by way of laughs and seems added just for his  star value.

The contribution  of family support and understanding in both marriage and careers and in finding yourself as a human being is what the film tries to highlight. A good watch both for family audiences as well as young working couples setting out in thier married lives, the film brings with it a message, told in a most engaging manner. 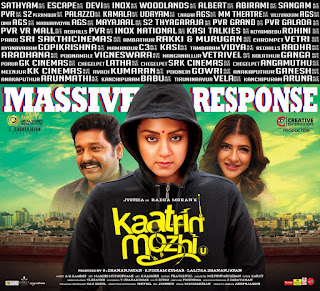