- November 23, 2018
Sei is the next release for Nakul after a gap. The story directed by Raj Babu revolves around an aspiring actor who is forced to take over his father's ambulance  driver  job for a day , when the latter is hospitalised. 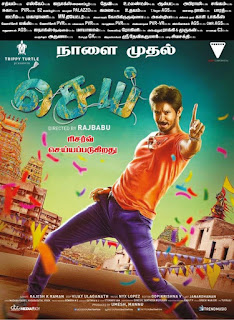 This act lands the hero in the midst of a plot where the strings  are pulled by several corrupt people in power. A corpse, mysterious deaths in a Home for the mentally challenged, greedy, fighting politicians, a dutiful journalist are all part of the web he inadvertantly gets caught up in. Does he survive the sudden turn of events where his  life is in danger is the story.

Nakul is a bundle of energy especially in the scenes as an aspiring actor. He pulls off the innocent , earnest youngster who finally develops a sense of duty to his family,  with aplomb. Aanchal Munjal (from Bollywood, debuting in Tamil) as an aspiring film maker gets her lip synch right and looks pretty in the song and plays her peppy role well getting her expressions just right.

There are twists at every turn,  keeping you guessing about what happens next. The topic of organ harvesting is an interesting  which could have been explored more.

The camerawork by Vijay Ulganathan does bring us some good visuals. The action scenes are well excecuted while the twists in the second half manage to pull a few surprises. The supporting actors have done a good job. The  length of 127 minutes keeps the film crisp.

However on the flip side, the screenplay is not taught enough, to keep us invested in the final outcome of an interesting concept of illegal organ harvesting. The few comedy scenes with the heros friends and also Aanchal's friends seem  forced and loud without eliciting much laughs. There is not much of a love track in the film. Some of the dialogues in the long drawn out climax sound preachy.