The title of any film is usually one of the main attractions of any project. It gives the viewer an inkling as to what to expect from the film. Titles are therefore carefully thought about and on some occasions, even explained in detail if they are mysterious sounding. 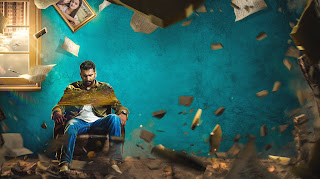 The relevance of the   Arulnithi-Shraddha Srinath starrer K13 has  been revealed by director  Barath Neelakantan, “K13 happens to be the address of a home and it has a lot of connectivity with the premise of this film. We are bound by   certain limitations of not revealing more than this, as we want the audience to experience it by themselves.”

Produced by SP Shankar and Santha Priya for SP Cinemas, K 13 is co-produced by Kishore Sampath and Tesha Shree T. Darbukka Siva is composing music for the film, Aravinnd Singh handles cinematography, edit is  by Ruben and sound design by Udayakumar.T. Sudesh has choreographed action sequences that are touted to be one of the highlights of the film.

K13 is an edge of the seat thriller that has both the lead characters essaying unique roles. “The reason behind choosing them is the very fact that they are known for choosing challenging content -driven roles and they are never in a hurry to go for immediate projects irrespective of their successes.”