Dev is the debut direction of Rajath Ravishankar and produced by Prince Pictures. Starring Karthi and Rakul Preet Singh in the lead, the film is a breezy love story with camerawork by Velraj and editing by Ruben. 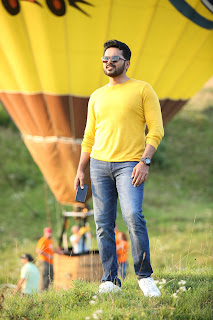 The story, put briefly, revolves around a rich youngster, Dev Ramalingam  ( Karthi) who indulges in his passion for adventure, travelling the globe, and believes that life is meant to be lived fully in all its glory, taking risks when  needed instead of wasting it behind a desk job.  He has 2 childhood friends ( the talented Amrita Srinivasan  and VJ Vignesh) whom he is very close to. He finds love one day in the form of internationally jet -setting businesswoman Meghna Padmavathy ( Rakul Preet Singh) whom he meets on Facebook. But the lady has no time for love.  She steers clear of romance largely because she  fears that after getting close to someone,  he might abandon her like her dad did her mother ( Ramya Krishnan). How Dev convinces her about his love and allays her fears is the story. 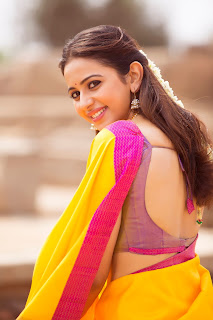 The highlights of the movie could be said to be Velraj's visuals (be it foreign locales or Nature in all its glory, ) the slick art work of Rajeevan with attention to detail in the stylish and contemporary  living spaces of the characters, the visually rich songs, the easy camaraderie between the 3 buddies and the cool parents who guide  but dont force thier children into anything. Some of the dialogues of the hero where he says that a girl's rejection should be accepted gracefully are a welcome change from the usual. The characters seem to blend organically into their slick  surroundings without looking like misfits. 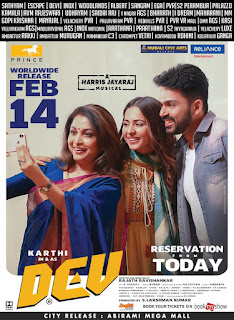 Karthi as the rich kid with cool sports cars and bikes and Rakul as the poised and businesslike, well turned- out professional, portray thier world quite aptly. Rakul brings out well  the innocence, dilemma and conflict of her character. Neerja Kona deserves full marks for costume design.  Rajath's portrayal of a heroine which is not the usually ' cute and bubbly' girl we see on screen, is to be commended.  The romantic situations are differently portrayed, from treks and camping to hikes and Nature walks, making for some rich visuals.
With its rich production values, snazzy making and stylish settings,   Dev gives the feel of watching a Bollywood film in many  places,  perhaps because of director Rajath's stint in Mumbai as assistant director. 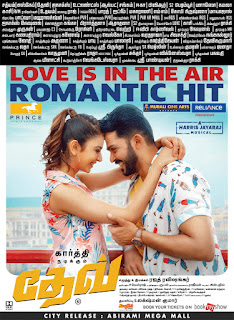 On the flip side, the  conflict when it comes, doesnt create quite the impact that it should have and we dont actually feel deeply  for the characters in the way we should. Ramya Krishnan though playing a cool mom, is largely under- utilized as an actor. The last part of the film seems to hurtle past in a hurry. A lot of dialogues back and forth may act as a tiresome speedbreaker for many. 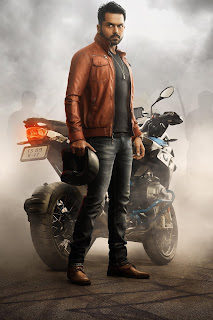