One of the films that has raised quite a few  expectations both,  because its a political satire and the debut of RJ Balaji as  hero, LKG lives up to the hype.

Produced by Vels Films International and directed by Prabhu the story, screenplay and dialogues are by RJ Balaji and his friends. Though its full of gags that keep the laughs coming all through, the film has a proper storyline.  Our hero LK Gandhi ( Balaji) is a young ward councillor with political ambitions  He doesnt want to be a failed politician like his father. He wants to rise, and fast!  How he uses corrupt practices and twists every opportunity that comes his way to achieve his goals, is the story. His final target is the CM 's chair. Does  he achieve it ? 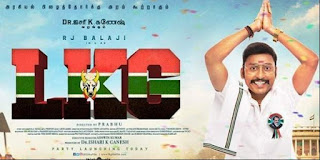 Balaji has indulged in some clever writing, making the film topical, using the current socio-political scenario in TN and the country as fodder for ideas. Every minute there are lines that make you laugh or think,  or both. Watch out especially for the ending dialogues. A delightful take on the times we live in, he spares no-one, from star fans and corrupt politicians, to the media and the new breed of meme ' engineers' ( who can make or break careers and even direct the way people think). The film highlights the role of  social media and the mobile phone  that can change the tide of events and public perception in  most ingenious ways, making it a weapon LKG uses to his advantage. Balaji has avoided romance and rightly so, keeping the film on course. He carries the film effortlessly on his shoulders.
moo
For Priya Anand, its easily one of her meatiest and best roles in Tamil, playing a corporate political analyst who helps LKG for a fat fee. Understated but nuanced perfectly, her performance is a big plus. Its to the writer's  credit that they have written a strong, thinking woman character who literally calls the shots through most of the film, portrayed as a no -nonsense professional, but without the arrogant attitude working women are generally portrayed with, most times. Priya plays the soft spoken but tough professional who knows her job, to a T.

Ramkumar Ganesan as the CM fits the bill and all characters  are well cast including Mayilsamy, JK  Ritheesh and Nanjil Sampath.


Without giving away spoilers, suffice it to say that the film touches on several aspects of a citizens life from  education to politics and even while exposing the rot, leaves a clear message without preaching.