Sarvam Thaala Mayam as the title suggests is a film  about music. The story is about Peter Johnson  ( GV Prakash) the son of a mridangam artisan who has grown up watching his dad make mridangams. An avid Vijay fan himself, he suddenly discovers a passion for the instrument and a desire to become a mridang player after a chance meeting with a famous maestro and vidwan ( Nedumudi Venu in a brilliant performance ). How his dream is thwarted at every step and whether he finally gets his goal is the story. 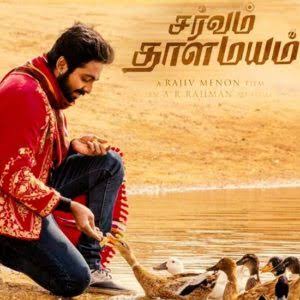 This is undoubtedly one of GV Prakash's career best roles so far. The way he has played the character bringing out his innocence, passion, frustrations , simplicity,  perseverance and emotions makes one firmly believe that nobody else could have played it better.  The casting is superbly done by director Rajiv Menon who has tried to explore the world of music and the struggles people face when trying to break barriers  enter a new world hitherto somewhat closed to them due to several factors. A look into the world of musical reality shows is also an interesting part of the film.

The music by AR Rahman and the sound quality raises the bar further enhancing the appeal.  Vineet and DD are also part of the cast.