The story of STR's much awaited VRV revolves around a young Billionaire NRI ( STR) whose grandfather ( Nasser) wants him to reunite the family and bring back his daughter ( Ramya Krishnan) whom he had driven away after she eloped with a poor lawyer ( Prabhu). 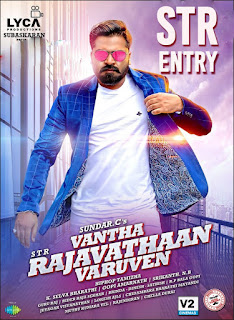 The near impossible- to- achieve task brings our hero to India where he hatches a plan to enter his aunts house as a driver and win her over somehow and take her to meet his ailing grandfather.Does he succeed forms the rest of the story.

Th film directed by Sundar C has  his stamp all over it. Large families, several comedians  ( Robo Shankar, VTV Ganesh and Yogi Babu) 2 glam heroines  ( Megha Akash , Catherine Tresa) several villains  ( Motta Rajendran, Radha Ravi) and thier henchmen who get bashed up in style by the hero, glam dance and romance scenes , grand sets and plenty of family sentiment fill the screen. 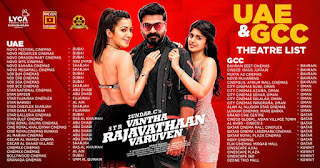 VTV  Ganesh and Robo Shankar are at thier best and thier chemistry with STR makes for some good laughs. However Yogi Babu could have been better utilized as some of his scenes seem long drawn out and low on the humour quotient.

Ramya Krishnan is well suited as the strong aunt and Prabhu as her doting husband. But the rest of the large family members dont have much to do. The songs though colorful and peppy, sometimes slow the pace. 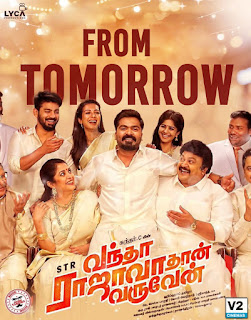 Its STR's show all the way and the star does not disappoint especially in the the comedy and stunt scenes. There are many dialogues where he sportingly pokes fun at himself, which tickle the funny bone.

Overall VRV is a family entertainer with easy laughs with  large doses of action and sentiment thrown in.