The Avni Movies Natpe Thunai held a grand trailer launch where the team spoke, highlighting the making of this film which has hockey as its theme. 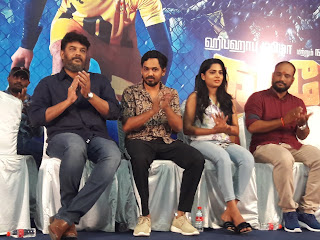 Speaking at the press meet the director Parthiban Desingu said ,'We trained many actors in the game for 3 months. It was very tough especially because of the heat. Some even fainted. Hero Hip Hop Adhi was injured along with many others. One even had a sun stroke. Everyday we had to have a water  lorry on the turf grounds to beat the heat. Many actors were injured but never even let me know about it.  All these injuries led to delays in shooting. But producer Sunder C gave us all the time and budget and never  pressured us.' 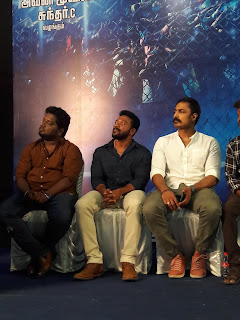 The film was shot in the night also. The film stars Hip Hop Aadhi in the lead,  Harish Uthaman, Vj Vignesh , Chutti Arvind, and Irumai Saani Vijay as well. 'Aadhi is so positive that we used to call him a positive wifi.'
The film was shot majorly in Pondicherry from  where the director hails. HipHop Aadhi said that he was apprehensive about the pressure of proving himself since it was a big budget film. He was injured in the calf and hand. 'When I began the project, thrilled by the script,  I didnt know how tough it would be to play hockey. I had to wake up at 6am and go to the grounds everyday! Yhats something I never did as a composer! Now its become a habit to wake up early. Its given me an idea of how tough the game is. The back will pain as you have to play in a bent form. We used to need massages after the shoot each day. Out of 22 team members of 2 teams, half were real players. At the end of the film we shot a real big match. 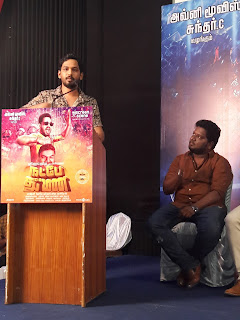 The shooting was a friendship journey with everyone giving thier best effort. Friends brought thier friends to thier team. '