Agni Devi stars Bobby Simhaa in the role of a cop called Agni. He is pitted quite by chance against  a powerful  and ruthless politician  Shakuntala Devi ( Madhubala) after a murder happens at a public place in broad daylight. 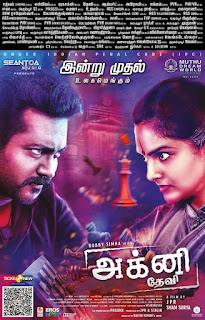 Agni manages to join the dots after a series of clues and witnesses keep appearing and giving him leads to solve the case  However, his boss ( Bose Venkat) is eager to wean him off the case which somehow leads up to the corrupt , scheming and greedy politician Devi,  who will quell any insubordination with an iron hand. Agni is unstoppable and vows to expose the baddies. In this game of one upmanship, who will win and at what cost?

While Bobby Simhaa fits effortlessly into his syern, thinking cop look,   Madhubala' s expressions go mostly over the top, both distractin, and bordering on unintentionally comical at certain places. Her body language doesnt manage to convey the fury of her dialogue somwhow. But she does create the element of terror by her evil threats and ability to exploit human greed for her ends.  Ramya Nambeesan has nothing much to do and barely appears here and there. Sathish as the hero's friend and cop has the usually predictable one liners and nothing much to do except ask questions  or make comments which act more as irritants and take away from the serious political thriller  genre of the film.
The film commendably, tries to touch upon several topical  issues  and ills affecting society and viewers can spot many a local issue, political and social, dealt with in the film. Watch out for a rather filmi twist at the end.