- April 25, 2019
by Rinku Gupta
The trailer launch of Kolaigaran was a grand affair. Produced by Diya Movies the film is being released by Bofta Dhananjayan. Said he, ' There is a good excitement in the trade about this film  I have  no doubt this film will take Vijay Antony to the next level. Arjun sir has been participating  in the promotions with great enthusiasm. I wanted to work with Andrew Louis again and I am happy to announce  have started   work on his next film with us. ' 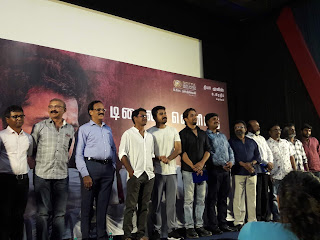 The event was attended by Fefsi Siva, Pushkar Gayatri, Radha Mohan, Sasi, Vasanthabalan amongst others. The film stars Arjun as a cop along with Bagavathy Perumal in a cops role as well.  Said Pushkar Gayathri, ' Andrew,  Vijay Antony and we were all clasmates in college. We are very proud they are doing so well. Vijay is multi faceted. We are very happy Arjun sir is doing this film.'
The music  is by Simon K King.  Two songs and two trailers of the film were screened. ' Its been a demading role. I became my character, ' said heroine  Aashima who has come from Australia and is debuting in Tamil. ' Vijay Antony has helped me been a great support. Arjun sir has a most charismatic personality '.
Director Sasi said, ' The main USP of this film is the combo of Arjun and Vijay Antony.  Im very happy that 2 music directors I introduced , Simon and Vijay are part of this film as music  director and hero. Just wait for this blockbuster in May!' Said Kolaigaran director Andrew Louis , ' Vijay was very excited to work with Arjun sir. Nobody could have done justice to this role except Arjun sir.  There is a strong substance to the heroine's role.  I came to know later that she too wanted to do roles of  substance only. Vijay let me choose my crew.  I owe it to Pushkar Gayatri for giving me thier Vikram Vedha team of Cameraman Mukesh, Editing Kevin and art  director Vinod Rajkumar.'
The trailer was launched by Sasi and recieved by RadhaMohan.
Said Vijay Antony,  ' This film is special for me since Andrew is my friend. He is a very sincere and hard worker and he should reach great heights. I enjoyed just watching Arjun sir at work each day and was fascinated. The second  hero of the film is Dhananjayan sir who had helped with extraordinary publicity.' He continued to thank all the dignitaries in stage and his team.
Action King Arjun said, ' The screenplay of this movie was mindblowing. All the actors have done a fantastic job. Andrew Louis has transferred 10times  more on screen than what he narrated which is usually very difficult.  Vijay Antony is a very humble, multi-facted man. He is not hypocritic. He has the tendency to give. The technicians are the pillars of this film.  '
Kolaigaran Vijay Antony