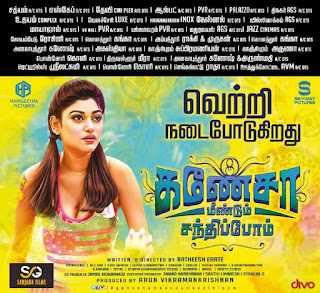 In brief, the story is about our hero (Prithvi Rajan),  who cheats people out of their  money, with petty thefts and cons. His reasons for doing so are revealed in the second half in the flashback portions.
Apparently he had rubbed a local village big wig the wrong way by damaging his coveted, vintage motorbike. His goons are out to wreak revenge. In the melee following a long chase, Prithvi's girlfriend is injured and 5 lakhs is needed for the operation. Does he succeed in rescuing her?

The screenplay does try to make the simplistically thin storyline a bit palatable. But its let down by wafer thin reasons for the whole hulla bulloo. The hero conning people who trust him ( including Oviya and Theepetti Ganesan) take away from our sympathy for him. Also, just a damaged motorbike at the centre of a long revenge drama seems a bit too much of a stretch to balance an entire film upon, unless it was done with an eye on humor.
The scenes with Singampuli dont add much to the laughter quotient but thier bonding seems organuc and their con jobs lend some lighter moments.  Prithvi to his credit has done a good  job and the negative shades actually suit him and liven up his act. Oviya's presence is to bolster up the the proceedings with her Bigg Boss fame behind her but she could have been better utilised in the plot.
Good music and camerawork come to the film's rescue. Some of the rural locations are eye -catching.