Kudimagan is directed and produced by Satheeswaran with Jayakumar and Jennifer in the lead. 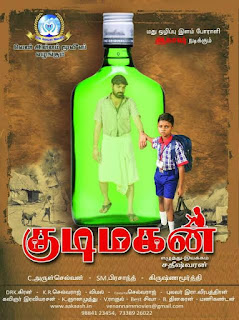 The plot revolves around the evils of drink and how the habit can destroy a family and affect the entire society badly.
The lead pair play an ideal couple, Kandan and Sellakannu,  with a small, school -going , diligent son, Akash. The father loves his son and spends all the time he can with him and his loving wife.

They form part of thier  well knot village community which one day encounters the opening of a wine shop with the help of a local MLA.

The villager's protest as the elders feel a wine shop in the middle of the villagr  will giveceasier access to liquor, create temptation and soon make men drunkards and create problems in homes and soon in the village society at large. Thier protests go unheeded and soon the village is reeling under the influence of liquor.

Their worst fears come true when the good samaritan and teetotaller Kandan too comes under the influence of his friends,  and takes to drink.

So deeply does  this habit take root that in the end his wife has to take an extreme step. What are the repercussions  on the innocent  school- going child? Do his friends repent?

The makers can be given due credit for choosing to focus on such a topic which hopefully will  lead to more awareness about the ills of liquor drinking  The lead pair as well as Akash and all the friends and villagers have done a commendable job. There is no undue melodrama and dialogues are kept crisp and  to the point. The suspense  as to what Kandan will do in various situations  is kept up at a steady momentum. The situation of a wife feeling trapped,  caught up in dealing with a lying drunkard of a husband  daily, with no ray of hope,  is well brought out.


A few attempts at humor at the tea shop seem contrived.
The film also touches upon  topical issues relating to farmers, politics, Neet and the like but retains the focus on the ills of liquor drinking.

A film with a strong message, though the end seems somewhat pessimistic.