- May 27, 2019
By Rinku Gupta
Entering its second week, Monster seems to be on  dream run. Just last week hero SJ Suryah held a thank you meet at the response to his role and the film.
Now the elated  Monster  producers Potential Studios held a Thank You meet post the grand success of the film.

Director Nelson Venkatesan thanked SJ Suryah for reposing faith in the script and the producers for taking up the unusual script. 'I promise to do more such scripts in future as well,' he said.
Cameraman Gokul Benoy was grateful for the reviews and response to his work. He thanked the entire camera and lights and crane departments for all thier help. Editor
VJ Sabu had the tough job of editing the rat's portions. 'Nelson retained the same successful team of Oru Naal Koothu. So we felt a sense of responsibility. After Kashmora this is my second film with producer SR Prabhu. They made us feel at home in the production. ' Writer Sankar Dass had some advice for the industry ,'Potential Studios wants to give films that have good stories and entertain families. Profit alone is not the criteria for them. Similar to AVM studios I see that same quality in this studio. According to me the story is the soul of any film. Writers are needed for films. Only then directors will know what are the loopholes in the story. Nelson recognizes the importance of literature and appreciates it. Dialogues are most important because that's what remains in the minds of the audiences. Cinema is an excellent medium to convey good messages. Good stories and good dialogues can raise the bar of any film. Directors have to work alongside writers for this and producers like Potential who recognize this, need to encourage this trend. '

S J Suryah said,' It was wonderful to see families, Kids, grand parents, all coming to theatres. I really enjoyed watching thier excitement at the theatres. I overheard them call me Eli Mama! theatre person told me that after Baahubali this is the first time families are pouring in with such a massive impact. Kids were anguished whe the rat was going to be killed. The way Nelson has put the seed of Vallalar's beautiful sayings in the young minds is amazing. I thank the producer for casting me in this role. I wish to work with this team again. ' 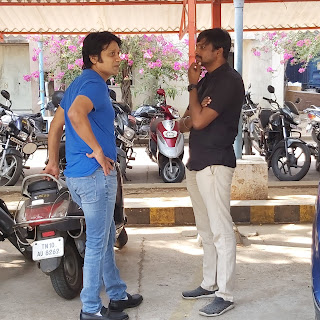 Ace producer SR Prabhu, ' Monster started with an idea to work with Nelson. We discussed a lot with him. When small films go to theatres, we have to see the the content should be worthy of the audiences spending thier time and money. Our audiences spread the word and helped footfalls increase in the theaters from the second day itself. I thank everyone fit thier support.'
SR Prabhu's next releases is Suriya's NGK uder his Dream Warrior Pictures banner this Friday.