Remember the iconic Selvaraghavan film 7G Rainbow Colony which released 15 years ago? The lead pair Ravikrishna and Sonia Aggarwal immortalised thier characters on screen and are even remembered to this day with nostalgia.

Wishful thinking about a sequel to the film has always been on the minds of Selva fans. Exploring  the possibility of what happened to the devastated and  transformed  Kadhir after the demise of Anita, coming from the Selvaraghavam stable would delight the legion of the film's fans. 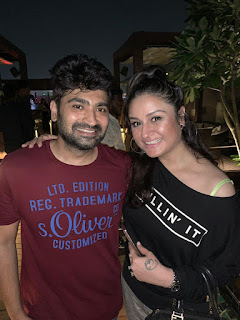 Is that wish coming true finally? Well, a chance meeting between the lead pair after 13 years, certainly gives rise to hope of dream turning to reality!
The duo were spotted at a popular star hotel in the city over the weekend in what Ravikrishna describes as a delightful, chance meeting. Sparks flew as the former screen lovers united and old memories were rekindled instantly.

Speaking to cinemaspeak in an exclusive chat the normally reclusive Ravikrishna narrates, " I had gone to the hotel for a meeting and later dropped in to wish hero Harish Kalyan for his birthday at a bash at the same hotel. As I was leaving, I suddenly saw my 7G Rainbow Colony heroine Sonia, entering.  Stopping her I said ' Hi'. As she was in a hurry, she politely replied and kept moving, without really seeing me fully. As she passed by, I caught her hand,  stopped her and smilingly I  said 'Hi! I'm Ravikrishna, you were my first heroine! Totally surprised at my gesture, she stopped in her tracks and turned towards me. In a split second she recognised me.
It was a most unexpected, pleadant surprise for both of us as  we were meeting after 13 years. The delight we felt was mutual and we chatted like old friends. Then we decided to  take  a selfie as well. It was wonderful running into her like that! "

So is a sequel to 7G Rainbow Colony on the cards? Thier easy camaraderie and heartfelt smiles in the photos speak for themselves.
Doesnt this providential meeting of the lead pair rekindle the idea of the  immense potential of exploring such an idea? Only director  Selvaraghavan  has the answer! 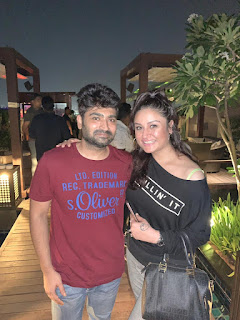