- June 14, 2019
by Rinku Gupta
Kalpataru Films' Sutta Pidikka Utharavu is directed by Ramprakash Rayappa and stars Mysskin , Suseenthiran, Vikranth and Athulya.
It begins with a bank heist in a mall by Ashok ( Vikranth), Selva ( Suseenthiran) and 2 more friends. Ashok needs the money for his child's operation. But in the bid to out run the cops, 3 of them land up in a slum tenement of RS Puram. Here the cops led by Commissioner Ibrahim ( Mysskin) manages to keep them contained in the area leaving no scope for escape and gives the order to shoot at sight.  As time for the child's  operation nears, tension mounts as the docs will not operate without the fees. What happens to the robbers?  Who wins this  cat-  and -mouse game and how? 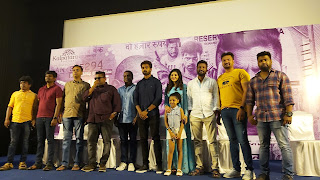 Without giving away any spoilers lets just say there are unexpected twists most cleverly woven into the superb  story and  screenplay by Rayappa. Mysskin is terrific  and most aptly cast as the tough no- nonsense cop while debutant Suseenthiran fits into his role with amazing ease. Vikranth sails though each emotion  of fear , desperation and hope with a natural ease and is equally proficient in the nail-biting chase and action scenes. Athulya as the slum dweller has a meaty role which takes the story forward and she  immerses herself fully into it (  thankfully not  the usual ' bubbly and chatty' heroine stereotype we see normally). Special mention must be made of baby Manasvi's excellent and moving performance.
The humor and satire is inbuilt cleverly into the screenplay and Rayappa has stayed away from the song and dance routine, making it a rivetting watch. The camerawork  in the narrow alleys and rooftops is well executed. Though one feels a bit of a lag in the middle, when the final twist is revealed things fall into place.  Rayappa ties in all the ends with such efficiency leaving one astounded and marvelling his handiwork at the same time.  A good watch.