- June 07, 2019
By Rinku Gupta
Produced by Diya Movies and released by G Dhananjayan’s Bofta Mediaworks, Kolaigaran is the second film of director  AndrewLouis and stars Arjun  Sarja and Vijay Antony in the lead roles along with newbie Ashima Narwal and veteran actor Seetha, playing her mother. Nasser and Bagavathy Perumal play cops. 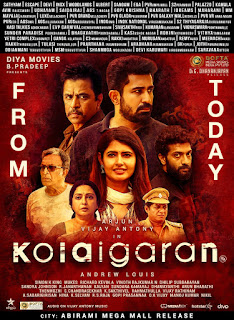 A psychological crime thriller, Andrew has borrowed the basic knot from The Devotion of Suspect X and has skillfully added elements to suit local sensibilities.
The story revolves around a murder which grabs cop Karthikeyan's( Arjun) attention. He zeroes in on suspects Dharini ( Ashima Narwal) and her mother (Seetha) and his investigations lead him to their neighbour Prabhakaran ( Vijay Antony). He feels that somehow the three are linked with the murder but is unable to pin the crime on them with certainty. Just as he is discussing the case with his to senior ( Nasser), clues falls into place and twists emerge that take the case forward to unchartered territory. Its all mind games someone is playing with the cops and Karthikeyan has to decode the clues. Does he succeed?

With a crisp run time  of 110 minutes, Andrew Lewis had delivered a top-notch thriller which will keep your eyes glued to the screen and wits focused on the dialogues. Style and substance both are on display all through in a movie that makes the viewer think without being just a spectator.  Nothing is in your face and Andrew 's  trademark is subtlety.  An expression here and and eye movement there are all it takes to  rev up the drama. The pace is crisp with no distractions, save 2 well picturised songs out of which,  one has a bearing on the story.
Aided by Simon  K King’s superb BGM and cameraman Mukes’ tight frames (which catch the subtlest eye movements), color codes of earthy tones of reds and browns along with melancholy blues ( Prabhakaran’s flat, reflecting his state of mind?) and  Richard Kevin’s crisp editing, Andrew Lewis has pulled out of his hat,  a slick, sophisticated and tight thriller at the core of which is an emotional connect.

The film’s  strength lies in its superb casting, minimal dialogues and no frills story telling. Arjun Sarja in a towering performance portrays the thinking cop to perfection and its hard to imagine anyone else doing justice to this role. Vijay Antony knows his strengths and limitations in equal measure and uses them skillfully to advantage to  display just the right measure of mystery, angst and emotions. In one emotional scene with Ashima, the duo manage to touch a chord with their performance. There is a particularly orchestrated stunt scene set to the strains of music and lyrics of Andavaney Thunaiyai which was almost stunts with visual poetry in motion.
Nasser’s role is crafted with a  toned down voice and subtle expressions and the dialogues between him and Arjun  make for a rivetting watch. I liked the choice of locations, vast melancholic spaces where the crime takes place, pleasantly decorated apartments, the cops sharing a meal in a small restaurant or at a  scenic park as they discuss the case … all very casual and real, which show the director’s penchant for detailing. When the villain  comes from Hyderabad, he even swears in anger in Telugu, showing Andrew’s efforts to keep things real. The sound department  deserves special mention.
A tad slow to pick up, but once it gathers steam, the story moves at a steady pace with twists and turns at every step. Kolaigaran , clearly a film top on the  list of well made crime thrillers in Tamil.
Andrew Lewis Arjun Kolaigaran Vijay Antony