Quick Review :Once Upon A Time in Hollywood

- August 17, 2019
By Rinku Gupta
A tribute to the Golden Age in  Hollywood comes Quentin Tarentino's Once Upon A Time In Hollywood starring Leonardo Di Caprio and Brad Pitt. 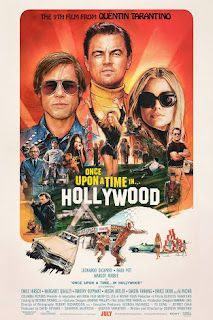 The movie beautifully captures the sights and sounds of the era its set in. A visual and aural delight, it's a must watch for fans of Hollywood movies. Each scene is painstakingly put together to transport you to the sixties and keep you glued as to what happens next.  The build up is slow and just when it seems that nothing is happening,  things all come together at a frenetic pace.  The actors ( including Al Pacino as Marvin,Margot Robbie as Sharon Tate) are brilliant and just live their parts.

The beauty lies in how Tarantino brings  multiple storylines together in a film that just teleports you to a different era. A must watch film with a leisurely laid back pace, with delightful nostalgic touches , glamour, plenty of references to movies of the era with  sentimental touches by the director.

At times it looks like nothing is moving as Tarantino indulges himself in slow moving scenes. But that only adds to the charm of this film with frames and characters  that will linger in memory long after you leave the theatre.