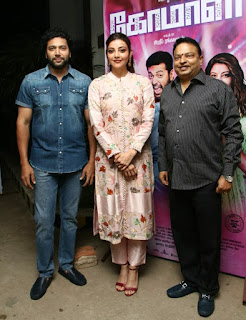 'Right from the beginning of my career, I have made a conscious effort to maintain a clean and straight record, thereby not involving myself in controversial issues. My stance and ideologies have only been exhibited in movies through the fictional characters I have played and have never crossed those limits.  I have always been a cordial and congenial friend to everyone and feel blessed to enjoy the privilege of being regarded as a mutual pal in the industry.

I am extremely happy to see the overwhelming positive response to the trailer of my forthcoming release “Comali”. The movie is already being labelled as a fun-filled family entertainer even before its release. I thank my fellow co-stars, media, the audiences and my fans for the love you have shown to the trailer.

However, a particular substance in the trailer involving Shri Rajinikanth sir has unfortunately hurt the sentiments of a few Thalaivar fans. I would like to make it clear that the element was included in a positive light. Being a hardcore Superstar Rajini sir fan, I have been as eager and anxious as any other follower to see him embark on his political journey. We all grew up watching his movies, his action and style had mandatorily become an inherent part of our nature and there is no way that we would show such disrespect to him in any way or his fans. What has made him more lovable  than before is that he saw the trailer of Comali and appreciated our team for the creative appeal and congratulated us for coming up with an unique idea. However, to see that such an ideation without any deliberate intent has been receiving resentments and some negative feedbacks from a section of his fans, we have decided to delete the portion in the movie.

Keeping fingers crossed, I am happily waiting to meet you as Comali in theatres on August 15, 2019.