- September 29, 2019
By Rinku Gupta
Sun Pictures' Namma Veetu Pillai is the next outing of the Pandiraj-Sivakarthikeyan duo, co-starrring Aishwarya Rajesh ( as his sister) and Anu Emmanuel ( as his love interest).Bharathi Raja ( his grandfather), Samudrakani ( his late dad), Soori ( his cousin) Natty ( his sister's husband) and a host of others make up the large star cast of this rural family drama. The bro-sis relationship forms the mainstay of the film. If at first seeing Aishwarya play his sister is tough to handle, the way the actors have handled thier roles makes you understand that Aishwarya was indeed the perfect choice for the role. Nirav Shah's camera work is a huge plus as is D Imman's music. 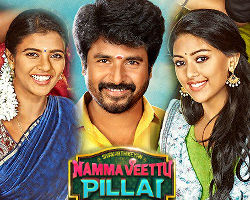 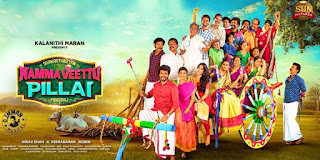 The story in a nutshell is fairly simple, its the larger than life emotions and characters that resonate well, appealing to the sentimental core within us. Arumpon ( sivakartikeyan) lives with his mom ( a widow... with a backstory) and sis Tulasi( Aishwarya Rajesh) and has a loving grandfather.But his 4 paternal uncles and maternal uncles dont respect him, nor help him in any way even though he is fatherless and a loving nephew. They particularly dont care for Tulasi either. The reason for this is revealed in the second half.
Due to a series of circumstances Tulasi marries someone Arumpon does not like much ( Natty in a consummate villainous role). Is the strong brother-sister bond affected by this addition to the family? When things spiral beyond control, does Arumpon's family come to his rescue?
Pandiraj's USP is his understanding of rural family sentiments and once again like Kadaikutty Singam he gives us a family film which would make people either nostalgic or recall someone they can identify with in thier own families. Lies, betrayal, love, contempt, greed, are situations that strike a chord and the huge well cast actor pattalam is one of the big pluses of the movie. Soori as the doting cousin and his little chatterbox son ( who off screen is director Pandiraj's own son, has the perfectly timed counters!) entertain in every frame they appear in. Anu Emmanuel has done a good job (but seems a bit out of place in the rural setting with the way she delivers her dialogues and her body language, which is even commented upon by Tulasi). Aishwarya Rajesh leaves a mark as usual, with her patent consummate ease. Bharathi Raja's presence adds a gravitas.

The grandeur of the songs and the racing screenplay full of emotion, drama, humor and romance make the film a good family entertainer. Sivakartikeyan is in a more sombre avatar than his previous films and we see both the consummate actor, as well as the witty, romantic and sentimental side of him in abundance, making for a satisfying watch for his fans.
On the flip side, the reasons for the enmity between Natty and Sivakartikeyan seem a tad petty and perhaps a bigger issue could have been added to the plot.
On the whole a wholesome family watch.
Aishwarya Rajesh Anu Emmanel Bharathi Raja kadaikutty singam Namma Veetu Pillai Pandiraj Sivakarthikeyan Soori