Vels International Puppy is the debut direction of Nattu Dev aka Murattu Single,who also does a brief role in the film as the hero,'s friend. The film launches Ishari K Ganesh 's nephew Varun as hero, after a few small roles in previous films.

A take on young love or rather, infatuation, and the aftermath of irersponsible acts is the crux of the story. 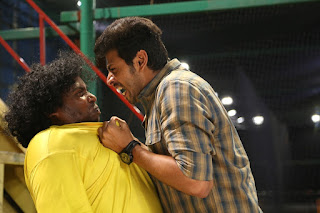 Prabhu ( Varun who makes a decent debut) is a student suspensed from college for watching adult content in class. Starved of female attention, he is ecstatic when a neighbour Ramya ( Samyuktha Hegde) enters the scene. The two end up as lovers when she discovers she maybe pregnant. Prabhu freaks out when he hears this and goes to Senior ( yogi babu) for advice. Does Varun grow up to take responsiblitity for his actions? How do his parents react? What role does Puppy, his pet dog play in all of this? 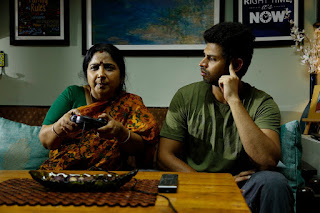 The coming of age kind of story has its moments. A mature look at modern day relationships and how youth must act responsibly seems to be the message of the director, which is commendable. Dharan's rich music lifts the film and good production values make it easy on the eyes. The lead pair are convincing in thier act. Yogi Babu plays a footballer and has been given a sentimental angle apart from his patent comedy, which is a good change. The message about sports being an equaliser is well conveyed. 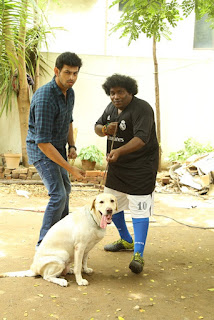 Varun makes a good debut ( though in some scenes the loud act could have been toned down). Samyuktha as the girl next door is  both charming  and attractive in her role.  On the flip side, there are no real surprises in the storyline.
A good one time watch.