Directed by Suresh Kamatchi, Miga Miga Avasaram has an interesting premise at its core. How do women working long hours in public places, work without adequate sanitary facilities like bathrooms? What constraints do they have to battle with on a daily basis? 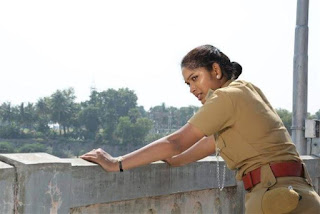 Through an incident that happens in the life of a female cop Saamandhi ( Sri Priyanka in a neat performance), the film seeks to explore this.  Posted alone on a bridge, far away from any amenities, she gets into a jam when she wants to answer Nature's call but is unable to do so,  thanks to a vengeful superior cop, who purposely denies her permission to leave her post or send a replacement. What happens as a result is the the story.

The film would have been more suited to a short film concept but the makers deserve credit for taking up such a theme, far removed from the normal fare.  Seeman, Harish and Vazhukku En Muthuraman ( as the bad cop) do their bit well.

There are moments which are gripping in this social drama and the tension builds up gradually. But few scenes seem stretched.

Though  with not much of an actual storyline, the film is a good attempt, with its heart in the right place. The title too is quite aptly chosen!