- December 14, 2019
By Rinku Gupta
Suseenthiran's next film is a sports drama with football at the centre this time.  Vishwa, the nephew of actor and producer RK Suresh, makes his screen debut as hero opposite tik tok sensation Mirnalini Ravi and  Sowmika. Narain plays his coach while Manoj Bharathi Raja his father, and Stun Shiva the villain. 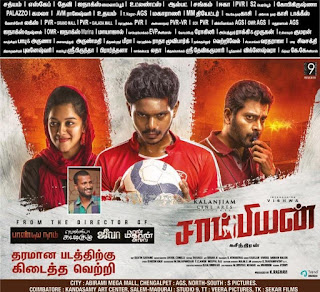 The story is about how a North Madras boy ( Vishwa) who is talented in football,  becomes part of a good coach's ( Narain) team. But his mother's worst fears come true when his dead father's ( Manoj ) connect with the local thug and politico comes to the fore and her son seeks revenge for his dad's murder, instead of concentrating on building a new life. Does he get his revenge? What happens to him?

Newbie Vishwa displays the body language of a sportsman and manages the emotional and action scenes well. Narain has a good role as the mentor as does Manoj. ( But Manoj somehow doesn't quite fit the role of a rough henchman).

Mirnalini's role is more of a catalyst and there is a well picturised song on the duo. Some of the actors seem ill at ease and few  scenes look staged somehow.
The film's football portions are well executed as are the revenge angles.  But the flashback and revenge angle doesn't offer anything new. The making is good and the canvas is large but the film seems to oscillate between sports, action and revenge. Overall,  a good debut for Vishwa.
Champion