(Subscibe to CinemaSpeak for video updates) 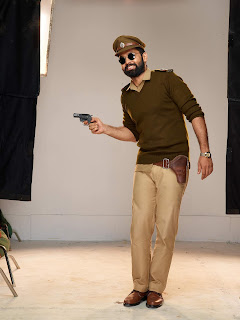 Set in the fictional landscape of Amaravathi, a cop Sriman Narayana ( Rakshit Shetty) pursues a decades old case of a lost treasure which leads him into dangerous territory. Jai Rama, a war lord and his enemy half brother, now turned politician, Tukaram, are also after this treasure. The clue lies in a stage drama surrounding the mythology of the Samudra Manthan by the devas and asuras. A group of drama artists and their leader Lakshmi ( Shanvi Srivastav) want to stop anyone getting their hands on this treasure at any cost. Does the clever cop Narayana succeed in outwitting the opposition and get to the booty? Does he manage to decode the mysterious clues? What are the deadly dangers he encounters on the way? 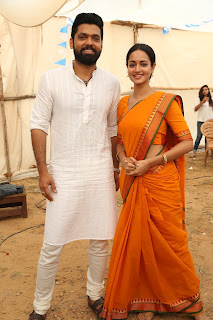 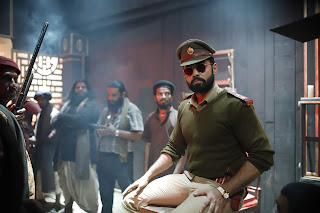 What works...
On the face of it, ASN is a humorous, adventure tale of a treasure hunt. But what makes it so enjoyable is the manner in which the story is narrated. Rakshit and his team of writers called the Seven Odds, have, along with director Sachin, ensured that there is never a dull moment in the screenplay which moves seamlessly across timelines. And yet it all ties up together so neatly, that you end up marveling at the sheer artistry of the bunch of writers, camera, editing, sound, stunt, dance and music teams who seem to have worked in perfect sync, to create this oeuvre, a sheer labour of love.

The magic of ASN perhaps lies in the way you can peel off as many layers as the depth of your perception allows, (looking for deeper meanings, and finding them in the narrative) and yet enjoy the film even if you dont. On every level, it delivers sheer entertainment value as a sure shot take away.
Sets and costumes departments deserve kudos for their extensive detailing and sense of aesthetics, which, along with the bgm and camerawork, create the unique atmosphere of the film as it travels seamlessly between the worlds of Indian Mythology and Hollywood's classic Westerns, best exemplified perhaps, by quirky touches like the signboard ' Krsna's Cowboys".

Shanvi as Lashmi, is the perfect foil to Rakshit as Narayana. The hero introduction scene is one of the most unique, as is the heroine intro as well!

Rakshit's performance brings out his character's complexities in a delightfully nuanced manner, his perfect comic timing being the heartbeat of the film.

Director Sachin deserves credit for the perfect sync of his cast in every scene, be it  drama, comedy or  action , with not an expression or movement out of place.

The ASN  Tamil version we saw had excellent dubbing ( especially of the lead pair, complete with right breathing, expression, intonation and inflections of voice). This is no mean achievement, for, many a time in certain films, dubbed voices sound flat and seem superimposed somehow. So, kudos to the sound and dubbing departments here!

The universality of the film is another highlight, ( especially since its to be released in 5 languages), for its mounted in a way that it doesn't limit itself by strict boundaries and regions, therefore making it relatable for viewers over language and cultural barriers, with its fictional locations and characters. Kudos to the sheer ambition and efforts of the team in attempting to pull this off successfully.

What doesnt..
Too much of a good thing can be hard on the digestion and so it is with ASN. Though one enjoys every punch, nuance and flourish as the tale unfolds, the length could do with some cutting, leading to a crisper, crackling version. Dialogue is a mainstay of this film, hence, too much of concentration for too long, can be draining on the viewer.

There are too many characters,  which take time to get used to.  The inter- mingling of timelines requires careful concentration for the story to be understood clearly.

Verdict:
A compelling,engaging, entertaining, must watch  , out of the box, movie experience. 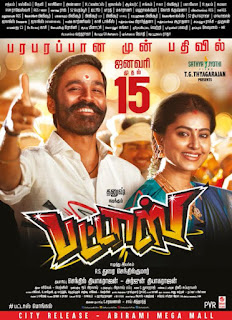 Subscibe to CinemaSpeak for video updates