Turning Point Damodaran's Pizhai, directed by Rajavel Krishna, has an interesting, topical premise at its core and for this the team deserves kudos, especially when most films  tend to follow the usual rom- com, thriller, horror or action template. 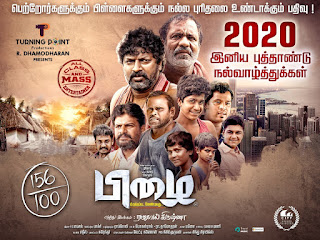 The story is about three school boys in a village, who are naughty, get into fights in school and totally hate studies. When they indulge in pranks, fail in exams or beat up other kids regularly, thier fathers ( who are daily wage , illiterate, quarry workers with dreams of educating their sons) resort to caning them,  as do the teachers.

One day, after yet another scrap , the 3 boys flee the village to search for work in Chennai with plans of returning only after they become rich and successful so that everyone will respect them back home.
But in the city, their innocence gets them into trouble as they land up with people who exploit them, with tragic results. Do they escape and ever return to their frantic parents? Do they realise the importance of education? Do the parents realise their mistakes in bringing up their kids? At what cost?

What works..
The 3 kids manage to get into the skin of their characters perfectly, being both irritating, incorrigible, naughty and innocent at the same time. The parents have done a good job portraying the over- strict moms and dads who never spend a minute to explain issues or show love and care to their children.
There is ample drama, tension and humor in the situations to grab one's attention all through.
The message of the film is well portrayed and serves as an important eye -opener both for parents and children, especially those from rural areas who run away from home, mistakenly thinking that the big cities have  the answer to their problems. Parents and teachers too need to think of other means of getting children interested in studies,  instead of resorting to corporeal punishments which drives them further away.

What doesn't work..
A bit too much of repetitive melodrama amongst the parents  and a romantic track that doesn't go anywhere are the downers. The shouting voices are too shrill in several places.
There could have been more time devoted to the change of heart for both parents and children towards the end, further re-inforcing the message the film seeks to convey.


Verdict:
A film with a good message,  engagingly conveyed for the most part.