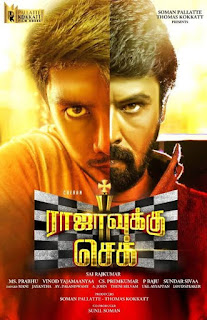 Cheran plays an alcoholic cop, affected by a malady known as the Sleeping Beauty syndrome where he can fall asleep suddenly and for undeteremined periods. This affects his marital life, with divorce proceedings turning bitter and running into 10 years. In the final hearing, he tells the judge that he is willing to grant divorce if his wife allows his 17 year old daughter to stay with him for 10 days prior to leaving for the US for higher studies. When she comes over, all goes well, till she is kidnapped by a man who she introduces as her boyfriend via a video recording ( Irfan in a convincing performance).
But unbeknownst to her, the boyfriend and his 3 friends have trapped her, as revenge for a previous arrest Cheran had got them into.
Now, the villains subject Cheran to a cat and mouse game, challenging him to find them and stop the crime they are planning. They put cameras all over his house so that he can't escape and force him to watch on the screen, the molestation they subject his daughter to. Does Cheran overcome insurmountable odds and rescue his daughter ? At what cost?

The thrills surrounding the plans of the villains and the slow build -up of what is going to happen next adds tension and keeps you glued to the screen. The screenplay moves fast.

The father- daughter angle is well brought out via a song.

The sleeping beauty malady further adds to the tension of the thriller.

All the actors have done a fine job, making the film watchable. Irfans turns villain in this comeback film and gives it his all, making for an intimidating villain.
However, Cheran as an alcoholic cop is tough to digest. Too many facial close ups seem unwarranted. How he remains a cop despite a sleep disorder is not clear. Too many scenes of Cheran smoking and drinking all through are unpalatable and repetitive.

While the modus operandi of the villains and how Cheran uses his wits to get the better of them, make for gripping viewing, the overall making of the film gives a dated, old- fashioned feel. The film has a good story angle, which could have been better presented. While the climax veering towards taking the law into one's own hands may seem problematic, the message about the dangers of technology and the need for parents and kids to openly communicate with each other, are well brought out.