Taana, directed by Yuvraj Subramani, stars Vaibhav as an aspiring cop, Yogi Babu as his friend and Nandita Swetha as his lady love.

Vaibhav plays a man afflicted by a malady affecting his vocal cords. Wherever he gets emotional or angry, his voice turns feminine. Due to this, he is rebufffed by a corrupt cop from getting entry into the police force. This affects his dad ( Pandiarajan) who comes from a line of brave police officers, celebrated for generations in the village.
He is determined to get his son into the police force for the sake of family honor. In the meanwhile, the cop within the dejected Vaibhav comes to the fore as he runs into a data sharing racket leading to mysterious deaths. Does he solve the crimes? Does he overcome his affliction? Does he restore the honour of his family?
The comedy bits with Yogi Babu and Vaibhav work well in parts. Vaibhav's own poker- faced style of humor is a big plus in the role. What works for the film are the comedy bits and later the scenes where Vaibhav investigates the crimes. A large part in the beginning is full of family sentiment, which may work well with a section of viewers
Nandita Swetha lookz pretty and bashing up rowdies, also gets light -hearted bits to prop up the romance template. One good thing director Yuvraj has done, is to avoid  the usual romantic song and dance track, which would have distracted from the main story.

However, there is a horror angle which is puzzling. The film tries to take on several angles, (like family sentiment, horror and a thriller ) and would have been crisper without spending too much time on the introductory deviations perhaps. But the director does deserve credit for trying out a different story line than the usual. The data sharing issues nexus with crime, also help, to  give this family entertainer a contemporary shade. 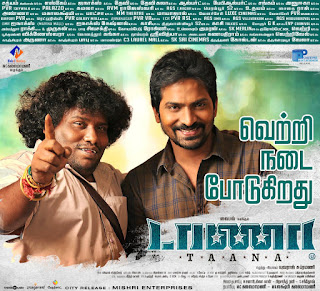