Bad Boys, Created by George Gala, is a series of action films featuring Will
Smith and Martin Lawrence as 2 detectives-Mike Lowrey and Marcus Burnett belonging to the Miami Police Department. While Bad Boys (1995) was about the investigation of 100 million of seized Mafia heroin by the 2 detectives, Bad Boys 2 (2003) a sequel to the 1995 film, was about the investigation on the flow of illegal drugs going into Miami. This is the third and final part of the Bad Boys trilogy in which the old-school cops Mike Lowery and Marcus Burnett team up to take down the vicious leader of a Miami drug cartel. 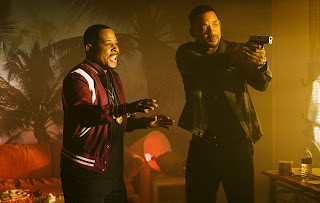 Now,  drug lord tries to take revenge on the duo just as they are about to officially retire.
Irina Marcus is now a police inspector while Lowrey is assigned to head up AMMO, a 'young Runs' group of millennial cops. With a drug lord and her son Armando against them, leading to several shoot outs and near death experiences, the duo has no choice but to take up the assignment but also wrap it up successfully. But there is a surprise in store!

Though there are a tad slow parts here and there the film makes up for it with some heavy duty action scenes,  especially in the climax.  Lots of humor, witty rejoinders and emotions rule the film, bringing out the angst and mid life crisis and tough decisions phase the bad boys are going through, making for an enjoyable watch.


Releasing in English, Tamil Telugu and Hindi in India .
Bad boys will smith