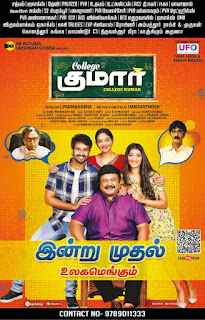 Director Hari Santhosh's College Kumar brings back veteran actors Prabhu and Madhoo to the screen, playing husband and wife.
Their college going son ( Rahul Vijay) does not as well in college as they expect, as middle class parents. One day he challenges his father that if he were to go to college, only then he would understand how difficult it is. His father takes up the challenge and starts going to college,( adding that he will one day become a CA) while the son has to now look after running the household.
How both of them cope in their new roles is the story. Are they successful in completing their challenge?

Prabhu as the humorous, happy go lucky dad is charming and lights up the screen as usual. Madhoo does her bit sincerely but seems to be doing an overkill in the expressions department in places. Rahul Vijay as the typical college goer is aptly cast while Priya Vadlamani makes a mark with her presence as his love interest.
The peppy numbers by Qutab E Kripa fit the bill.
The film has an interesting premise as itv attempts to show how much for granted one takes parents and how parents put too much pressure on their children.
But the making in several places reminds one of 80's college campus films and could have been treated a tad more in keeping with contemporary times.