Nedumaaran ( Suriya) comes from a humble rural background. But an incident affects him deeply and inspires him to put his heart and soul to pursue his dream. He wants to make flying a low cost affair, accessible to everyone, without prohibitive ticket costs.  But his low cost aviation dream runs into many hurdles along the way.  How he overcomes each, almost insurmountable obstacle, to achieve his dream is the story.

The choice of subject, about never giving up and success against all odds, is a sure shot morale booster and the makers deserve full credit for choosing such a story. 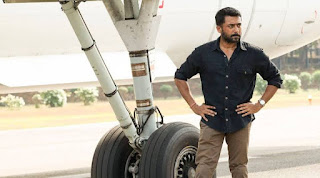 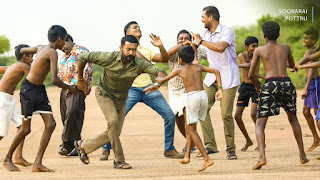 Suriya , the consummate  actor his fans love, is visible in every frame, sans any starry trappings and this is a huge plus. The sheer gamut of emotions he displays and takes the viewer through, are mind- boggling. Suriya, a star known for his sheer acting prowess, is back, and raring to go like a lion uncaged and Sudha's  script, screenplay and dialogues give him the perfect arena to perform. Goosebump moments guaranteed.

He is ably supported by Aparna Balamurli as his wife ( Bommi) who holds her own before the star performer. The chemistry between the duo is palpable and their scenes together are well written, showing Sudha's mastery when handing inter- personal relationships.

Urvashi as Nedumaaran's mother and Paresh Rawal as the rival tycoon are the other solid performers who add value by their presence.  Mohan Babu's scenes, though minimal,  are ones to watch out for as well. Good casting is another big plus. 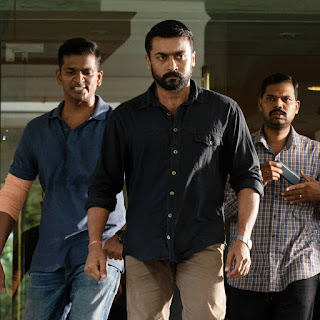 There are technicalities and jargon of the business of aviation but Sudha has managed to simplify them without taking away from the strong emotional chord that binds us to the film. And in this,  its Suriya's solid performance, that keeps it so real, that the viewer undergoes the same emotions he does on screen.

GV Prakash's music are both a visual and aural delight and another solid pillar in the film as is the camerawork by Niketh Bommireddy.

The flip side is that the non- linear narration may be a speed breaker for some, as also the interjecting song and dance ( though vibrant) in a few places. The tension between the lovers adds to their chemistry, but the almost constant serious look of Bommi makes it a tad tiresome to watch. Also,  in several places, especially in emotional scenes ,the dialogue delivery is too fast with words spilling into each other. 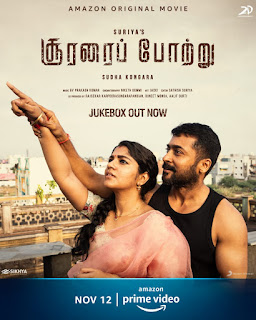 A Suriya show all the way, director Sudha Kongara's  Soorarai Pottru, will feature on the list of Tamil cinema's memorable movies.  No stunt blocks, no comedy track, no bowing to commercial constraints,  yet delivering a fine, meaningful entertainer, this Suriya film will rank high on the actor's list of career best performances.