Rajinkanth not to enter politics !

Even as fans looked forward to Superstar Rajinkanth's grand announcement of his political party's name slated for the year end, came the news of his recent hopitalisation.  4 crew members of the Annaatthe unit he was shooting with,  tested Covid positive while Rajini himself had to be hospitalized with highly fluctuating blood pressure.

He was howecer discharged in a few days, but advised medical rest and reached home to Chennai. Today, in a press statement from him,  came the most unexpected news. Rajini announced that he will not be entering active  politics.

In his statement, he apologises to fans and  explains in detail, the reasons for this painful decision. 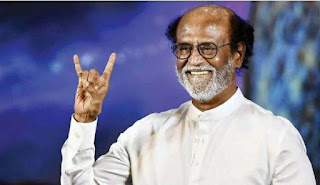 Detailing the events that led up to this decision and taking it as a sign from God, he said,  "After announcing that my political party will start in January, I went to attend the shooting of 'Annaatthe' in Hyderabad despite the advice of doctors. The film unit consisted of around 120 people who daily underwent Covid tests, isolated themselves from each other, wore face masks and shields and much more. Inspite of the various precautionary measures taken, 4 people from the crew came in contact with the virus. The shooting was immediately called off by the director and everyone present there were tested, including me.

My test results were negative, but my blood pressure was not stable and constantly fluctuating. As per my medical conditions, I should not have constant fluctuations in blood pressure, as it would severely affect my transplanted kidney.  Therefore, under the supervision and advice of my doctors, I was hospitalized for three days.

Considering my health, our film's producer Mr. Kalanithi Maran postponed the rest of the shoot.

He added that his health conditions and the covid pandemic would hamper his political journey, "The political governance I am aiming for, cannot be granted merely through campaigns done in Press and Social Media platforms alone. No one with political experience will deny the fact. I will have to meet people, attend meetings and go on campaigns that would hamper my health.

When Corona exposure took place in a group of 120 people, I was hospitalized for three days and had to be under surveillance. Now, this Corona Virus has transformed and a second wave is coming in a new form. Though Covid vaccines may be available, I have been taking Immuno Suppressants to maintain good health, due to which I may get unwell during the course of attending meetings and election campaigns. Then, people who trust me and travel along in this political journey would be both mentally and financially affected."

Apologising to his fan clubs he said, "To the members of Rajini Makkal Mandram, fans and people who were expecting me to start a political party, I did not intend to disappoint you. Kindly forgive me.

For the last 3 years, the party and its members have been following my instructions sincerely. Even during the Corona Lockdown, you went ahead to help people  in need, following all safety precautions and consistently served the people. Your good deeds will definitely come back to you and your family.

When I met you for the last time on November 30th, you all had only one concern in your mind, "Your health is the most important thing for us and whatever decision you will take, we will stand by you". These words are etched in my heart forever and I am forever indebted for the love and affection you have showered upon me. 'Rajini Makkal Mandram' will function as always. "

Thanking his supporters, Rajini added, "My heartfelt thanks to Mr. Tamilaruvi Maniyan for being supportive and concerned about my health for the past 3 years and writing about the same inspite of facing criticism. I am grateful to the esteemed Mr. Arjuna Moorthy, who resigned his post from a reputed political party and joined forces with mine. Without contesting for the elections this year, I will do whatever it takes to help the people with their needs.

I have never hesitated to speak the truth. Your truth and transparency, in my well-being and  your love and care for me, will make me live. My beloved fans and the people of Tamil Nadu made this decision of mine and I kindly request that you accept the same. Long Live the people Tamilnadu! May Tamilnadu Flourish! Jai Hind!"