The film is a political satire set in the rural hinterland of Tamilnadu. Yogi Babu plays a naive village barber who lives under a tree and is usually taken for granted by the villagers, until one day he is given a new name and identity, called Nelson Mandela, by the village postwoman Thenmozhi ( Sheela). He gets a voter ID card which then changes his life. 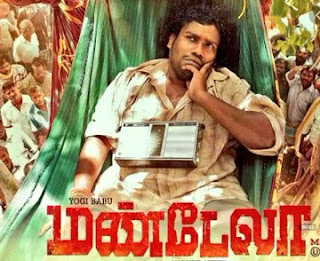 There is an election scheduled to take place and Mandela gets caught up in the midst of 2 warring sons of the village chief, who are both vying for the one vote ( of Mandela's) which has the power to decide the winner.  Big money is involved in the political game of one -upmanship and how Mandela becomes caught up in the cross fire its the story.  How the  naive Mandela now learns to use the situation to advantage of the village is the story.

Yogi Babu is perfectly cast in one of the best roles of his career. Sheela is impressive as the post woman. Each of the large cast is well chosen by director Madonne.

The story is an apt presentation of the times and  very  engagingly draws in the viewer, giving him ample food for thought. The message of the  power of the common man's vote is brought out without preaching  using satire as a most effective tool. Well written and executed, the film leaves you with a warm feeling. Watch out for the amazing climax.

A must watch film.