With 'Raja Varu Rani Varu', Kiran Abbavaram successfully drew everyone's attention. The film proved that he is a performer that Telugu cinema would warm up to.

Since then, the young actor has been offered a few interesting projects. 'SR Kalyanamandapam', his promising movie, will hit the screens on August 6. After a gap, Kiran will be seen in 'Sebastian P.C. 524', a film that will be released in both Telugu and Tamil. 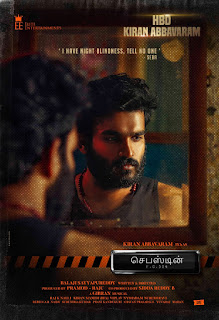 Written and directed by Balaji Sayyapureddy, the film is being produced by Pramod and Raju. Namratha Darekar and Komali Prasad are the film's heroines.

Made in the backdrop of night-blindness, the film has completed its shoot. The post-production works are in the final leg. Attempts are on to bring the film to the audience soon in both Telugu and Tamil.

This will be Kiran's Tamil-language debut. On his birthday today (July 15), a special birthday look has been unveiled.

Producers Pramod and Raju said, "The birthday poster has received an encouraging response. The glimpse of our movie, which was unveiled on Christmas, has been a hit. We will release 'Sebastian P.C. 524' after 'SR Kalyanamandapam'. This one is a pakka commercial flick."

The director said, "Kiran's performance as a policeman named Seba is awesome. It's not easy to act as a person with night-blindness. Kiran has pulled it off extremely well. As an actor, he is doing a variety of movies. Ghibran's music is going to be a major highlight. Besides his songs, the BGM will be superb. Our movie will impress all sections of audiences."

A teaser of 'SR Kalyanamandapam' was released on the eve of his birthday. The first look of Kiran's 'Sammathame' is also out today. A film to be produced by Kodi Divyadeepthi (late Kodi Ramakrishna's daughter) was also announced. Mani Sharma is its music director. It will be directed by Karthik Shankar. This one will be Kiran's 5th movie.

Here are the details of the project :