It is a remake of a Malayalam film and set in a boys hostel. Ashok Selvan plays Kathir, a  student beset by loan problems who is offered a payment of his debt by Athrishtalaxmi ( Priya) who in return wants him to take her into the boys hostel he resides in. 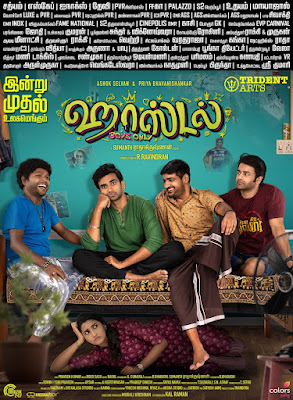 When this happens, there is chaos all around as strict warden Father Kuriakose ( Nasser) and his man Friday Saathappan (Munishkanth) are on a hunt to find out whether a girl is inside the hostel.

A cat and mouse game ensues as the pursuit gets hot and the the two youngsters try their best not to get caught, aided by friends.  Throw in a ghost with a past history, who falls in love with Saathappan who wants to escape her, and there is total mayhem. Hot on the heels of Athrishtalaxmi, is her loan shark father, played by Ravi Mariya. Do the youngsters escape the wrath of the hostel warden? Does Saathappan escape the ghost?

The horror comedy is a mixed bag of laugh-out-loud moments, slapstick humor and  situational comedy  mixed with witty one liners, and a play of words between the characters, though many a time laced with double entendres. The exchanges between Munishkanth and Nasser add to the moments of  situational comedy while the game of one-up-manship between Kathir and his gang who are constantly trying to outwit Kuriakose and put the blame on Saaathappan add to the laughter quotient in large doses.

Priya Bhavani Shankar does a  good job as the no-nonsense girl on a mission who can take care of herself and hold her own in adverse situations.  For Ashok Selvan it's yet another different attempt, and he does full justice to his role. Sathish brings his brand of typical one liners, all adding to the melee. The action blocks with the ghost and Ravi Mariya's gang notch up the slapstick elements.

Though the screenplay moves at a steady pace, some moments may seem repetitive as the youngsters escape from room to room in the hostel.  The hostel set could have been better made, considering the entire story is set there.

Family audiences may have to watch out for the beeped out double entendres sprinkled along the way.  A fairly engaging, light- hearted watch, Hostel keeps the laughs coming in a somewhat steady manner.