The story highlights the pitfalls of using social media in a reckless manner. 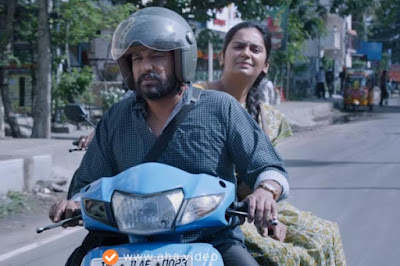 A physically challenged Ezhilan ( Vidharth in a realistic, superb performance), ĺeads a normal middle class life with his wife ( Lakahmipriya) and kids. One day, as he is sleeping in a metro train, a social media addict, Antony (Karunakaran in a meaty role), assuming he is drunk, posts his photo on social media with inappropriate comments which soon go viral. This act has a terrible affect on Ezhilan's life. Soon, Antony learns the social and legal impact of his post. His new bride ( Masoon Shankar) bears the brunt of his anxiet. Matters come to a head with the law on his heels. What happens next? 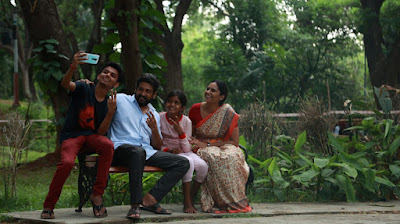 The film is a lesson to many about being socially and ethically responsible when using social media,  the wrong use of which can also have alegal impact. Its a finely tuned act by Vidharth ( who nails the peeformance of a kind man tormented by the unforseen) and Lakshmipriya, who are natural and realistic in their portrayals. Vidharth's performance touches an emotional chord.

For Karunakaran, its an interesting role, and he brings out the several layers of emotions, from humor and romance, to anxiety and angst of a man torn with the realisation of the seriousness of his act,  but unable to share it with his bride and family. Its good to see the actor in him in full form, in a performance -based role. Masoon Shankar as his wife does justice to her role.

There are changes from the original to suit local flavours. Overall, the film, with its contemporary message is a useful mirror to a society caught up  in the grip of social media.