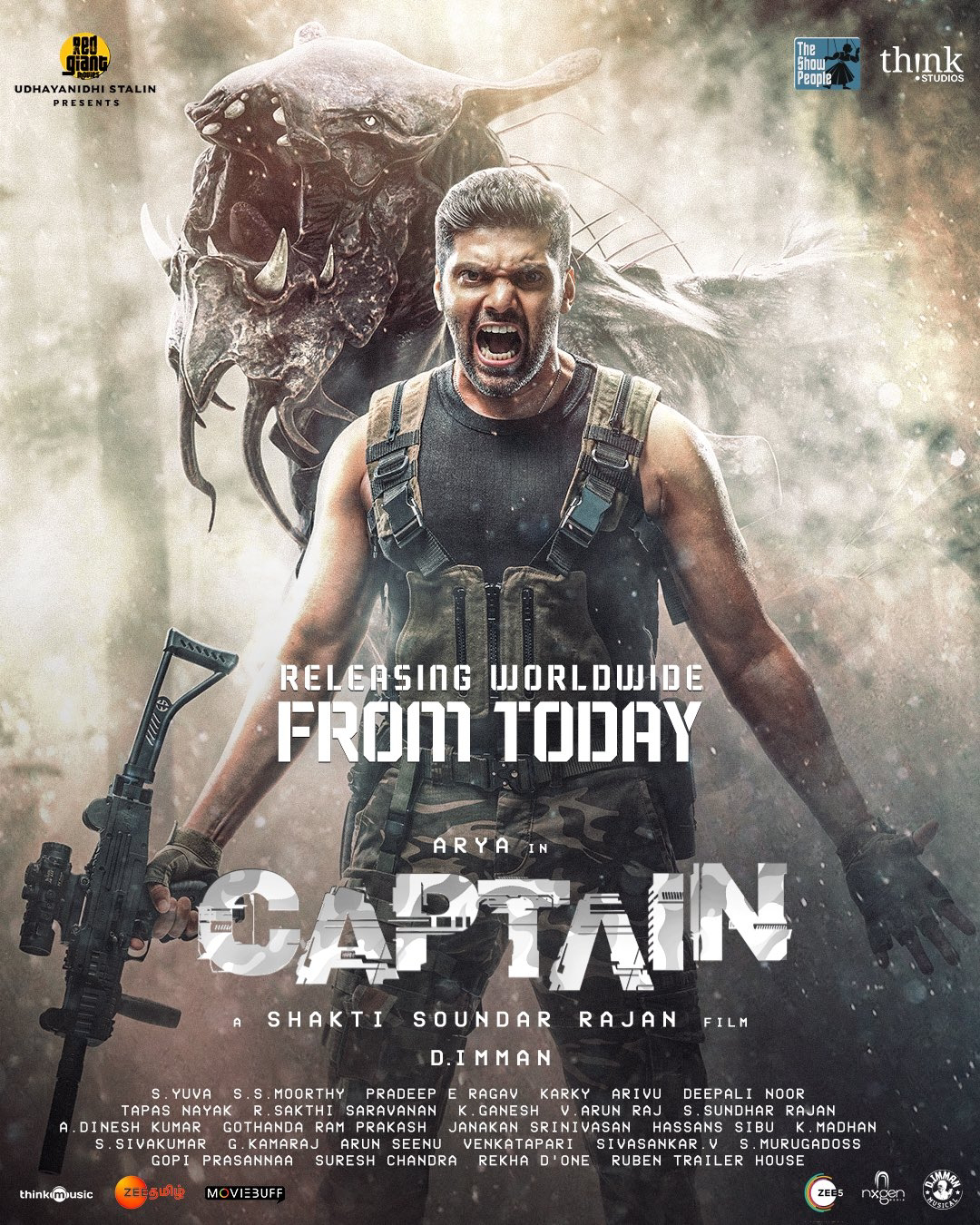 Arya plays Vetriselvan a brainy, brawny and patriotic, upright Army officer who has a close knit relationship with his  team (Kavya Shetty as Rekha, Harish uthaman as Karthik Devan,Gokul as Karuna and Bharath Raj as Sheik Mansoor). His team is chosen to lead an investigation into a mysterious series of deaths and untoward happenings in a thick forest area in the North East. Dr Keerthi ( Simran) is the scientist in charge of researching the strange findings in the area. What happens when Vetriselvan and his team are confronted by an army of alien like creatures in the forest, whose force and intelligence is far superior? Who is behind these happenings ?  Can Vetriselvan win against such an enemy? Or is the real enemy somewhere else?
Its an Arya show all the way.  Kudos to the fit actor who looks every inch the part. His physique, body language  and demeanour add credibility to the role. His command over, as well as camarederie with, his team is well brought out.
Every actor is well cast and fits the role to a T. Simran as the businesslike scientist is superbly cast and brings style and panache with her presence, even as she portrays various shades to her character.
The romantic scenes with Aishwarya Lekshmi and Arya are well conceived and portrayed in a dignified manner in keeping with the story and atmosphere of the film.
The action scenes, especially the opening scene and few in the jungle with the alien- creatures make for good viewing and keep the  thrills coming.
The screenplay keeps up a swift pace and dialogues are crisp are  kept to  a minimum.
Kudos to director Shakthi Soundar for attempting an alien creature concept action story, ably aided by D Imman's BGM and camerawork by S Yuvraj. The audiography  by Tapas Nayak is also an added plus.
However, though the film keeps you engaged and on tenterhooks, certain suspense elements could have been better handled to bring a greater high. Few situations seem too easily resolved at times.  The end with its twist does seem to  leave few unanswered questions. Is there a hint of a sequel perhaps?
Overall, Captain is a refreshing concept in Kollywood, neatly executed with high production values, superb locations, Arya's fitting portrayal, a well chosen cast, good bgm and top notch visuals.
Rating 3/ 5.
Cast :
Arya as vetri Selvan
Kavya as Rekha Shetty
Harish uthaman as Karthik Devan
Simran as Dr Keerthi
Aishwarya lekshmi as kavya
Gokul as karuna
Bharath Raj as Sheik Mansoor
Crew: