Junga starring Vijay Sethupathi (in his home production) Sayyeshaa and Madonna along with Yogi Babu, Saranya and Suresh Menon is the next offering from director Gokul.
The  film is touted to be a comedy of errors revolving around a miserly don who wants to take over where his father Don Ranga and grandfather  Don Linga left off. He wants to get back the wealth thry squandered, especially a cinema hall that they lost. But does he succeed or end up as 'problem dons' like them is the story. 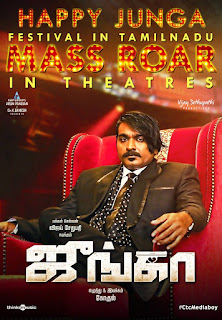 For Sethupathi the long dialogues, change of gear from India to France, from local to global don, are child's play. With a straight face he delivers several spoof lines ranging from topivs like cinema to the current socio-political scenario. The  perfect synch he  shares with Saranya and his don patti are the highlight moments and their scenes will certainly  elicit chuckles.  The premise of a miserly don offers several situations for laughs.
Madonna is grossly under utilised in a brief appearance and song while for Sayyeshaa the film gives ample opportunity to showcase her dance moves ( Lolikriya song), grace and beauty. As the girl living in Paris she is an apt choice, getting her lip synch right and does justice to  her  scenes with Sethupathi.
Yogi Babu as the ever hungry, loyal friend gets our sympathy and evokes laughter at the same time.
The breathtaking locales of Europe and the beauty of the Chateau de Chambord is magnificently captured by Dudley.


On the flip side, some of Sethupathi's dialogues are too fast, loud and too  long, leading to a certain detachment from the scene. Some scenes defy logic like where he swims in an icy river from Paris to Chambord to save money. (How would a newcomer know the route ? )
The scenes with the Italian mafia and police stunts and chase sequences hardly evoke much tension or interest.
Despite lags, the film sails through with laughs coming in unexpected places especially in scenes with  the wacky don Patti  and don amma characters. 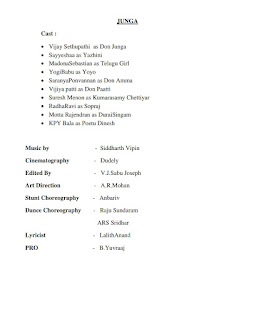