- November 15, 2018
by Rinku Gupta
Utharavu Maharaja seems to be an attempt to narrate a  story of several layers by director Kuraishi.
The film evolves around events in a young boy's life which seem to scar him enough to give him a personality disorder. Is he Vasu, Ravi or a royal in the line of Raja Raja Chola? The film attempts in a highly convuluted manner, to answer these questions. A medical thriller, a heist story,  with love and action elements many tracks are introduced along the way. 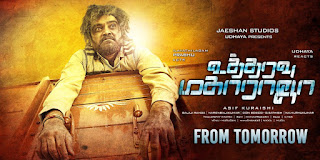 Produced by Udhaya with him in the lead role, the various tracks though interesting, are marred by the loud shouting and literally running around in circles in the first half. With the presence of Prabhu, the second half picks up. There are some lovely visuals of Kodaikanal. Udhaya gets ample scope to show his histronics in multiple get ups.
His son Jaeshan does a good job playing the hero as a child.

But the treatment of the story is so over the top, ( in one part, a heroine is planning to go to Mars) with unnecessary comedy thrown in at serious places,  that the thrill elements are diluted. Nasser, G Dhananjayan, Thalapathy Dinesh, Sriman, Kovai Sarala, Manobala and MS Baskar are part of the cast.