The Nayanthara starrer Kolaiyuthir Kaalam is readying for release.   Shot majorly in England the film is a thriller produced by Etcetera Entertainment and StarPolaris Pictures LLP.  The film is directed by Chakri Toleti who could not attend the press meet as he was in the US. 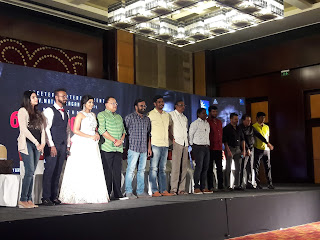 The heroine Nayanthara, though absent at the event, came in for much praise from the guests present. Dignitaries present included Radha Ravi, Sai Priya Dev, Suresh Kamatchi, Pravin Kanth, Karu Palaniappan, Durai,  Rajshri Ponappan and producer V Mathialagan amongst others.
After several speeches and counter replies regarding the problems within the  producer council by Suresh Kamatchi, Pravin Kanth and Durai, Karu Palaniappan  and Radha Ravi tried to lighten the tense mood and urged producers not to bring these  issues to a film event in the public eye. 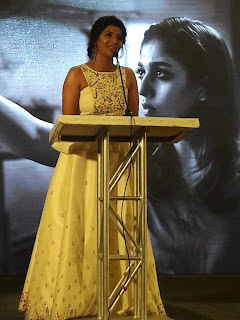 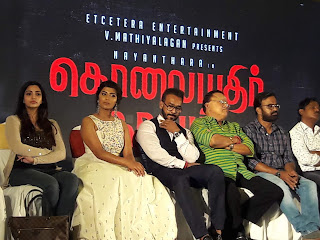 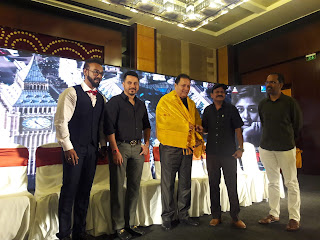 Said producer V Mathialagan who has made films like Appa,  ' The film's Karnataka rights have been sold and for Kerala rights people are approaching me. Trend Audios have bought the audio rights. I have produced 12 films and I realise that its a very difficult task. People are not encouraging but there good people too. Star Polaris LLP have bought the TN rights. They plan to invest in 5 films next year.  This film is very crisp and entertaining. Nayanthara has said she will be part of the press show. She contacted me via the P R O and said she will support the film. Releasing a film is more diffficult than making it. We need media support to make our film a success."
kolaiyuthir kaalam