90 ML met with huge criticism with the release if its trailer. It also created huge expectations as everyone was curious to see what the movie was all about. 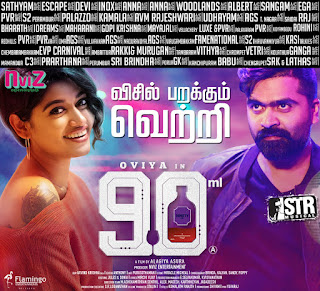 The story revolves around 4 women living in an apartment building, belonging to different age groups. Each has issues in life which they slowly begin to open up about once their friendship thickens. And the binding factor turns out to be Oviya who  plays Reeta, the new entrant in the building. Shes a carefree  warm hearted and friendly girl,  in a live- in relationship, who loves to party, smoke and drink when it suits her. She ends up  making friends with the other 4 girls, forming  a girl gang who, once they get over the shock of her lifestyle,  soon begin deeply caring for her and each other. How they open up about certain  situations in thier lives and sort out thier issues with the help of each other is the story.

The film  is visually rich and showcases an upscale neighbourhood and the modern lifestyle of youngsters. Its full of feel good moments and lots of partying, laughter and fun which may come as a culture shock to many since its not usually explored in our cinema, especially with women taking the lead.
Director Anita Udeep has used double meaning dialogues and girl -talk about love, relationships, intimacy and physical attributes in various places. Though it may seem shocking to see girls guzzling beer, exploring thier desires and talking freely on these topics, the way its been integrated into the story makes  it seem credible.  Various kinds of modern day relationship   issues have been touched upon  via the 5 protagonists.

Though  there are a number of films made every year  with titillating item songs, suggestive lyrics,  male actors uttering double meaning dialogues  and tasmac scenes and songs,  this film has drawn more raised eyebrows mainly because women are seen doing some of these things. Whether the extent of the  outrage from certain quarters is justified or not is for audiences to  mull over and decide for themselves.

The performances fit the story though at some places all the giggling gets repetitive and artificial.  There are too many partying situations some of which seem artificial. But to its credit, the story keeps moving forward with each scene. Watch out for STR's small cameo.