Akshaya ( Jyotika) and her aunt Masha (Revathi) make a living conning people with small time tricks. Motta Rajendran plays thier friend who helps them sell loot, like stolen cars etc. The duo come across a prisoner in jail ( Sachu) who reveals how she found an akshaya patra which keeps multiplying whatever you put into it. The con women see immense potential to get rich quick and hatch a plan to get hold of the vessel which is now in the premises of a powerful rich man, Maanasthan ( Anandraj). Do they get over hurdles to finally get the magic vessel? 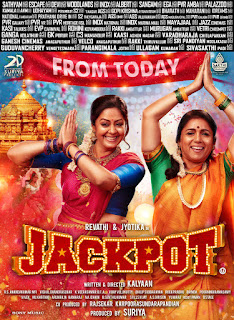 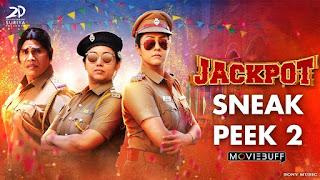 The film has good production values with big sets and well picturised mass songs. Jyotika looks like a million bucks ( fit physique for action scenes, snazzy, trendy costumes, hair and make -up all adding up well) which adds to the visual appeal of the film. For Revathy as her partner in crime, the role is a walkover. But even as Jyotika's several mass action scenes are admirable and the actor deserves full credit for pulling them off, we wish there were more fun, con job scenes in the film. For the most part its the scenes with Anandraj and his gang of hit men that elicit most of the laughs. ( watch out for his double action scenes which he does with effortless ease!). Manobala and Motta Rajendran are under utilised but thankfully Samudrakani has no moral science moments in the brief appearance he makes.
The big disappointment is casting Yogi Babu as a man who is constantly calling himself ugly and poking fun at his own appearance in a myriad ways ( in how many more films are we going to see such a talented comedian be given similar scenes in the name of ' comedy'?)

The camerawork lifts the film as does Jyotika's performance. Its indeed commendable that she carries an entire ' mass'  film on her shoulders in her second innings.  But we cant help but wish Jackpot had more comedy and a tad less of mass action moments that take away screen time from its immense plot potential. Overall, a one time fun watch for family audiences.
Jackpot Jyotika