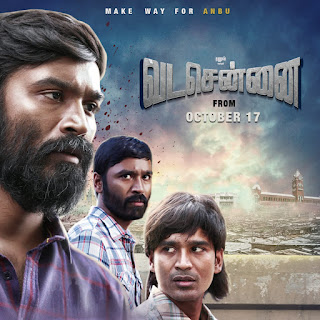 As the title suggests the film is set in the milieu of North Madras. The story revolves around the characters played by Dhanush, Ameer, Samudrakani, Kishore and Pavan with Aishwarya Rajesh and Andrea playing the female leads.

Without giving away spoilers, suffice it to say that when Anbu ( Dhanush) enters a jail as prisoner, the pace quickens and several incidents happen, all leading to an act that seems to seal his fate. His life so far ( where all he dreamed of was to become a carrom player and marry his lady love) takes a full U turn and a new phase in his life in unleashed. 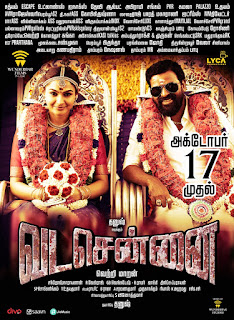 The film explores the lives of the other leads as well and finally we see bits of the puzzle all fitting together to form a whole. Each individual's life is intertwined with the other where ambition and greed overpower loyalty, leading to betrayal.

A classy making with the realistic and authentic  portrayal of the milieu, the slang with all expletives thrown in liberally,  all add to the atmosphere of the film. Director Vetrimaran  seems to have done deep research and the efforts show in the tiniest details.
The filn covers many decades with  the screenplay jumping back and forth in time, and thereby demands your full focus. Vetrimaran ensures that lazy grey cells are on high alert always, to understand  events unfolding on screen.

On the flip side itvcan be said that the various intros to so many characters takes time to sink in leaving one a bit confused in the beginning. The expletives and violence  could also be a turn off for many.

However, the actors are exemplary in thier performances and each has been given ample space and time to perform. Dhanush is a natural while Aishwarya slips effortlessly under the skin of the bold, strong girl. Andrea packs a punch with a few suprising twists while Ameer as Rajan ups the ante.

Yet another classic film from the director of Polladhavan, Aadukalam and Visaaranai.
Dhanush Vada Chennai Veyrimaaran