Atharvaa thrilled to play a cop in 100

Auraa Cinemas , Atharvaa starrer 100 ,  written and directed by Sam Anton is releasing on May 9th. The press meet of the film was held today in the preseence of the team. 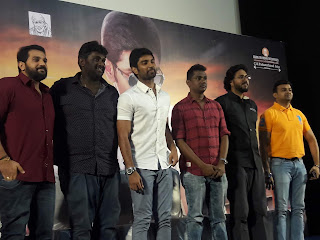 Sam CS has composed the music. ' 100 is very special to me for the screenplay is full of twists and very  gripping.  The  bgm is very important for tgis kind of a cop story  and  when they told me that, I felt very happy as it gave me lot of scope. The way Sam Anton has designed the film and the characters is very well defined. He gave me total freedom. I tried to make sure the music of this film is different from  other cop films that I have done. About Atharvaa I can say he has done  an amazing job as action hero. This film has a very topical theme and the music is on air and doing very well. '

Director Sam Anton was very grateful to  Atharvaa . " I have shifted  genres from comedy to action and I am very grateful to Atharvaa for accepting this film and encouraging me. Producer Mahesh is my senior in college and he was very supportive. Krishnan Vasanth is  my cameraman who has supported me in all my films. Sam Anton  encouraged me to do an action film. Editor Ruben is my close friend  and he gave his best.  " Dilip Subbrayan is the action choreographer of this cop thriller.

The film is set in a police  control room and deals with the current issue  of women's safety. The film has tried to give a solution to the issue revealed the director.
Producer Mahesh of Auraa Cinemas said, 'This film will give a change over to Atharvaa is what I told him. The cast and crew are a proven team. Its got all the elements of a commercial cop story yet with strong content.I have distributed 30 plus films and this is my first as a producer.  The film is being released by Padamchand Jain's GGuru Sri Mishri Enterprises. The film has both entertainment and content. We have pushed the date to 9th May in order to get better screens."
Atharvaa said he was thrilled to be finally doing a cop film. ' The 100 police cop who first answers a distress  call is a very important person as he fecides the course of action. I was very happy to di a cop role which at the same time is not over the top."