The Thanksgiving meet of Vels Film International's Comali was held as the film completed 50 days. 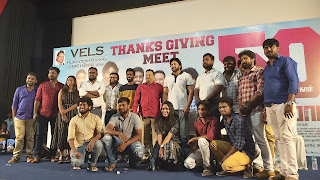 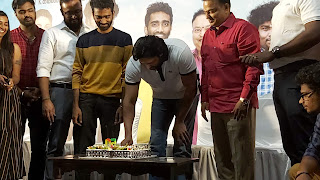 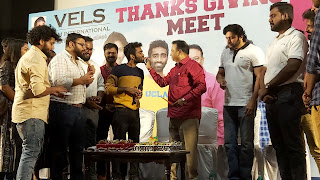 Present on the occasion was the director Pradeep, Jayam Ravi, Ishari Ganesh, KS Ravikumar and Shaktivel amongst others.
Speaking on the occasion, KS Ravikumar who has acted in the film, complimented Jayam Ravi on his dedication towards cinema which would take him places. About Ishari Ganesh he said ," He is part of cinema which runs in his blood. Education is only his second busines. So he will always do well in cinema. "
Sakthi Film Factory distributor Shaktivel said ," The 2 films I did with Vels gave me not only great profit but also great satisfaction. They work as a family. I feel that cinema runs in Ishari K Ganesh 's blood. He always says that the success is due to the blessings of his father. Usually Jayam Ravi captures family audiences easily. For the first time I think youth audiences too were attracted. I am really happy to have worked with this team.Even after coming on OTT , on 52nd day also tickets are sold out online. I had this kind of success in Kadaikutty Singam. Had this been a festival release, the collections would have much higher!" 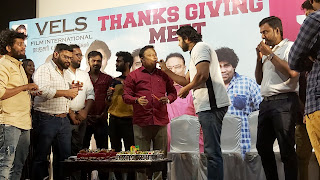 Producer Ishari K Ganesh said the main reason for the success of Comali was Jayam Ravi. " Without Ravi it would not have achieved this success. Big heroes would not do this film and so we were searching for smaller heroes. But suddenly we thought of Ravi and wondered if he would do it. But I was confident that if he liked the script he would do it. More than making a film releasing a film is a bigger problem. So mamy films are waiting for release despite being censored. But we never felt it the stress because of Sakthi Film factory. We treat all our technicians as a family."
The producer confirmed that he would be making another film with Jayam Ravi and director Pradeep again.
Jayam Ravi said he was happy to have worked with such a good team "Hip Hop Adhi has given me two blockbusters. I hope we work together in the next film too. Richard our cameraman has been a true pillar who will unceasingly work till he gets what's right. I thank the audiences for keeping me going this far. Yogi has become my good friend. I'm working on directing him soon. He was a pillar to this film and I was fixed on having him for this role."
The meet ended with the cutting of two cakes, one for the 50th day celebration and the other for the advance birthday celebrations of Ishari K Ganesh who celebrates his birthday tomorrow.
He praised distributor Shaktivel for his honesty in dealings. He revealed ,"Producer Ishari K Ganesh gave the director a car. But to me also he has given several limited edition watches. He is such a positive person and I am very happy to be associated with him. "
Comali Ishari K Ganesh Jayam Ravi