Sakthi ( Sivakarthikeyan) soon gives up his childhood dream of becoming a superhero like Shaktiman, once he grows up. Instead, he becomes a forgerer of degrees and helps students procure seats in colleges,  for a hefty fee. 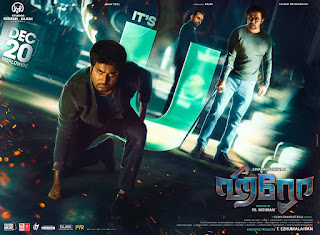 He runs into a motivational speaker ( debutante Kalyani Priyadarshan in a refreshing avatar) who urges him to look deeper within himself and discover the nobler person inside.  Circumstances further lead him to find Sathyamoorthy ( Arjun in a fine performance), a Gentleman, thinking professor who wants to change the way students should learn, by letting them innovate and discover their true potential instead of learning by rote. All his plans of changing the educational system come to a halt when a greedy businessman with international connections ( Abhay Deol who lives the part) , who believes that innovating and thinking minds are a threat to the existing monopoly of trade and goods manufacturers and other stake holders.  So he lobotomises any innovative students he finds. What happens when he discovers Sathyamoorthy's secret innovations academy? Does he succeed in destroying the kids and their lives? Does Shakti ( inspired by Moorthy) rediscover the superhero within him and channelise his energies to save lives ?

The basic premise of the film is good,  with the message that education should help kids think and discover practical solutions for improving daily life instead of being mere intellectual labourers ( here the school reminds one of Shankar's Nanban). The idea of letting your child follow his dream will strike a chord with families( especially the rough note book scene).   The way Sivakarthikeyan discovers the super powers of the immense potential he has within him,  makes for a good concept. But the execution is shaky in parts where long talkie portions get repetitive and preachy, testing ones patience.

Arjun lights up the scenes he appears in and both heroes do well in the action blocks. Arjun scrores with the way he uses gadgetry to quell the baddies, despite his physical  handicap. The movie is clearly all about mind over matter here.
The villain neatly executed by Abhay Deol, aptly cast as a formidable force to be reckoned with.
Kalyani is largely absent from most of the film and surely she could have been given something substantial to do in the scheme of things?


The focus on the real life innovators at the end credits adds a nice touch,  adding greater credibilty to the premise and innovations portrayed.  The way Sivakarthikeyan takes a back seat in the heroics department is commendable,  as the film is all about an ordinary man discovering his extraordinary, latent  powers within. Children are at the forefront of this film,  and it is they who help him achieve 'superhero' status,  with the power of their minds,  an interesting touch.  But logic is pushed to the backseat when the Kids are shown  being shifted from place to place, and able to put together hi- tech gadgets in remote places,  without anyone the wiser.

The bgm by Yuvan rises to the occasion (but is too loud and almost drowns  the dialogues in several places).  A lot of the film takes place at night and the dark bits get tiresome to navigate through after a while.

An  inspirational message film, which could do with less of the preachy flab (which wears it down),   and a tauter screenplay.  A more serious Sivakarthikeyan than usual, with tough competition from Arjun.
Abhay Deol Arjun Hero Kalyani Priyadarshan Sivakarthikeyan