Setting an example in these tough times of the Corona Pandemic, is the ace director Mani Ratnam's family. 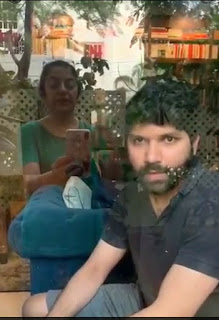 Khushbu Sundar tweeted a short video recording wherein Suhasini is seen talking to her son Nandan Mani Ratnam, who is behind a glass door. The conversation reveals that Nandan who returned from London last week, has self- quarantined himself at home. He stays inside 2 rooms and has no contact with anyone except for recieving food.  The video details the process and care taken to see that even though he has no symptoms, he remains cut off from others as a safety measure.

Recently  actor Prabhas, who returned from a Europe shoot, has also self- quarantined himself due to the Corona Virus scare , as a precautionary measure.

The video by Suhasini is an added impetus that is both commendable and inspirational,  getting the message of the seriousness of the situation across,  even more effectively, thanks to the visual medium.