- March 14, 2020
By Rinku Gupta
JSB Studios' Asura Guru stars Vikram Prabhu as Shakti, a tech savvy thief who has a problem. Whenever he sees oe hears about large amounts of money, he has to fight an urge to somehow steal the money. But he doesnt spend any of, instead he stacks it in a secret room in his studio apartment. Only his friend ( played by Jagan) knows the childhood trauma that causes this kleptomania. Diya( Mahima Nambiar) is a hired , smart detective who is the only one who manages to get to this thief. The cops are hot on his trail, as are dons from whom he has stolen. What is the reason behind Shakti's behaviour? Will he get away from those on his trail?
Director Rajdheep has got a goos star cast in place who do their bit earnestly. Mahima does a good job as the feisty, intelligent detective ( Rajdheep deserves credit for giving the heroine a real and unconventional job and a major contributor to the story). Vikram Prabhu does well in the emotional, and action scenes.
Jagan as the hero's cop friend is a sound choice as is Baahubali Subbaraj as the persistant cop.

Yogi Babu as the tea seller doesnt create many laughs. Rajdheep has kept the romance portions to the minimum and stuck mainly to the story, keeping it moving at steady pace, with a fair amount to twists.
But the reasons for Shakti's strange behaviour doesnt manage to leave an emotional impact nor sound logical enough for the his elaborate heists and behaviour.
Better executed action scenes would have lent greater credibility to the plot. The CG scenes ( especially like the one cutting through the train top) only help in further reducing credibilty. A crime action thriller which could have been made with a more engaging screenplay, and a more logical back story. 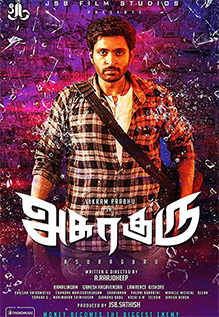