The story revolves around a young mom Parvathy ( Nayanthara) who has to travel with her little son ( Master Rithvik aka You Tuber Rithu Rocks) from Coimbatore to Kochi by bus. There, the child who needs portable oxygen support daily, has to undergo an operation that will heal his damaged lung and give him a new lease of life. 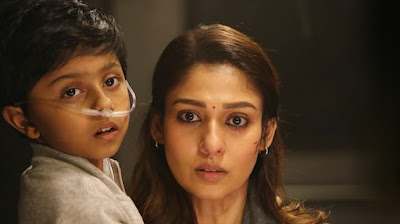 But things don't go as planned. The bus comes under a horrific landslide on a bypass mountain route. Trapped, the inmates have only a few hours of oxygen supply left to survive. When a vicious cop on board learns of the extra cylinder of oxygen for the child, he unleashes havoc to procure it. As the clock ticks by and hope is lost, the inmates resort to violence. Will Parvathy be able to save herself and her child? Will the bus and the inmates be saved by the NDRF on time? 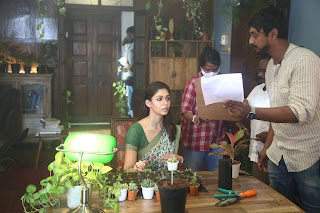 The build up of tension slowly and the dangerous outcome of human greed, selfishness and struggle to survive which  can bring out the worst or the best amongst humans is well portrayed by the director, ably supported in his vision by good performances by the cast.

Nayanthara exudes elegance  and proves her mettle once again, as she keeps us glued to the screen with her screen presence and credible performance as a mom who will do anything to save her child from harm.  The mom-son duo share a cute chemistry on screen and Master Rithvik, who debuts in cinema, seems the perfect choice for the role.

The underlying message  about the wrath of Nature and the need for humans to preserve the balance in Nature in order to survive is superbly brought out. Kudos to the director for that. O2, the title assumes a very different and more significant importance towards the end.

An engaging survival thriller with a good message and Nayanthara's excellent performance and cute mom- child chemistry with master Rithvik, O2 is a good watch, streaming on Disney Hotstar.